Recall that Biafra and Yoruba Nation agitators came together on September 14 and marched at the UN headquarters in New York, seeking for an independent state from Nigeria. 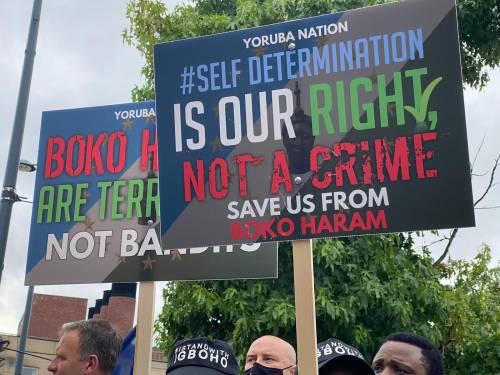 Yoruba nation protesters
Yoruba agitators under the aegis of the Nigerian Indigenous Nationalities Alliance for Self-Determination has distanced itself from the Indigenous People of Biafra.
This comes after the FG threatened to deal with the group for protesting with IPOB members at the United Nations Headquarters, New York, the United States of America.
Recall that Biafra and Yoruba Nation agitators came together on September 14 and marched at the UN headquarters in New York, seeking for an independent state from Nigeria.
The march coincides with the ongoing UN Assembly, where Nigeria’s president, Major General Muhammadu Buhari (retd.), and other World leaders are expected to attend and give addresses.
“Rattled” by the continuous protest by the agitators, the Presidency threatened to deal with Yoruba Nation agitators based on their alliance and association with IPOB, an organisation tagged designated as a “terror group”.
Reacting, Akintoye in a statement by his Communications Manager, Mr. Maxwell Adeleye, alleged that the “Nigerian Government planted IPOB banner in the March venue with the hope of using it to discredit the agitation for Self-Determination before World leaders”.
He described the statement credited to the Nigerian Presidency as an “unintelligent attempt” to paint the peaceful demonstration black because it has succeeded in exposing to the world, the alegged genocide and fraud being perpetrated in Nigeria.
Akintoye asked the Nigerian Government to address all issues raised by the protesters, rather than resorting to blackmail and peddling of fallacies.
He said, “Rather than listen to the yearnings and aspirations of our people, the Buhari-led government has consistently waged war against people who attempt to checkmate the menace of Miyyetii Allah in the name of grazing of Cows.
“Now, the Government is attempting, unintelligently, to criminalise peaceful organisations like NINAS, Ilana Omo Oodua, Lower Niger Congress, and Middle-Belt Rennaissance Movement for embarking on a peaceful March outside the shores of Nigeria where the guns and ammunitions of the Presidency cannot touch them.
“For the record, we wish to state very expressly, and with all due respect to whatever they represent, that NINAS and its affiliate organisations – Ilana Omo Oodua (IOO), Lower Niger Congress (LNC) and Middle-Belt Rennaissance Movement (MBRM) have nothing whatsoever to do with IPOB.
“We also want to put it on record that IPOB is not in any way involved in the ongoing March in New York. The IPOB banner you saw was obviously planted by agents of the Nigerian government masquerading as members of NINAS for photoshoots which we have since unraveled and checkmated.
“We say to the Presidency that the unintelligent attempt to cause frictions and divisions between the Yoruba people in the West and the Igbo people in the East is dead on arrival. We shall continue to collaborate, peacefully, for the salvation of our people.
“Instead of planting IPOB banners in our March venue with the hope of using it to paint our struggle black before the world leaders on 24th September that he wants to address UNGA, we advise President Muhammad Buhari to stop mortgaging our future through borrowing of endless loans.
“We shall resume the March on 24th September, Opposite the United Nations Headquarters to tell President Muhammad Buhari to his face that his Miyyetii Allah people are the enemy number one of the people of South and Middle-Belt of Nigeria, and they are the authentic Terrorists.”
Top Stories