The US said this in a Facebook post on Wednesday while also expressing support for ongoing police reforms. 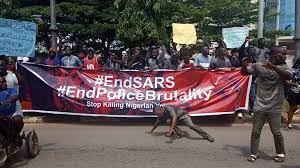 The United States Mission to Nigeria has sent a message to #EndSARS protesters.
According to US, Nigerian youths protesting today should take a political approach to addressing their demands.
The US said this in a Facebook post on Wednesday while also expressing support for ongoing police reforms.
The post read, “Today is a day to reflect on the loss of life and property during last year’s #EndSARS protests. We appreciate the work done by the various judicial panels and look forward to the implementation of recommendations and compensation to victims of police brutality. We support ongoing police reform efforts. We encourage those who demonstrated for change to engage politically to achieve it.”
Protesters took to the streets of major cities on Wednesday to mark the one-year anniversary of the #EndSARS protests of October 2020.
While the protests were without hitches in Abuja, policemen in Lagos arrested several protesters at the Lekki toll plaza.
Top Stories