The 41-year-old said that she believes in love, hopefully, there will be just one more wedding for her. 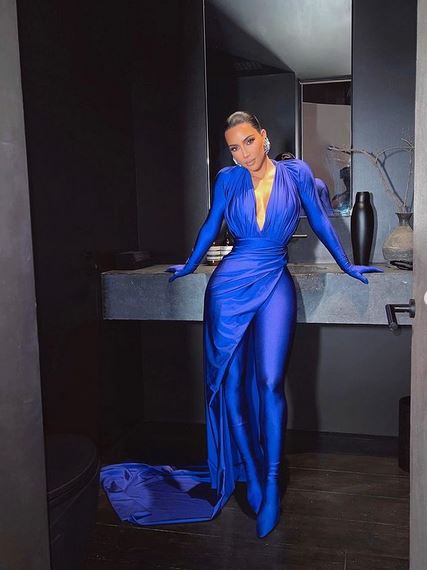 Reality star and mother-of-four, Kim Kardashian has disclosed that she would love to get married again despite three failed marriages in the latest teaser of Hulu’s The Kardashians.

The 41-year-old mogul declared, ‘I believe in love. That’s why hopefully there will be just one more wedding for me.’

The sentiment came during a conversation between Kim, mom Kris Jenner, and friends Simon Huck and his then-fiancé Phil Riportella.

Kim was dressed in a sleek and edgy all black outfit complete with scrunched, black, leather opera gloves as she sat on a terrace sipping tea with her loved ones.

Her waist-length, deep brunette hair flowed down over her shoulder as the group started off chatting about Kourtney Kardashian and Travis Barker’s imminent nuptials.

They speculated about how soon the couple would tie the knot following their October engagement.

That’s when Kim – full name Kimberly Noel Kardashian – chimed in and said, ‘[Travis] already knew that they were trying for a baby.

‘To me a baby [means] you’re stuck for life. Marriages come and go!’ she joked, poking fun at her three failed unions.

Then, speaking to her engaged friends, she added, ‘No offense, guys! Take it from me! And good luck at your wedding!’

The three-times-divorced mother-of-four cracked herself up as she exclaimed, ‘Fourth time’s a charm!’

Prior to her current relationship with Pete Davidson Kim walked down the aisle three times.

Her marriage to rapper Kanye West was her longest – the former couple was married from 2014 to 2021, and their union spawned four children: North, eight, Saint, six, Chicago, four, and Psalm, who turns three on May 9.