A traumatised Grace appealed for welfare and support for her two kids — one year & five months and 5-year-old. 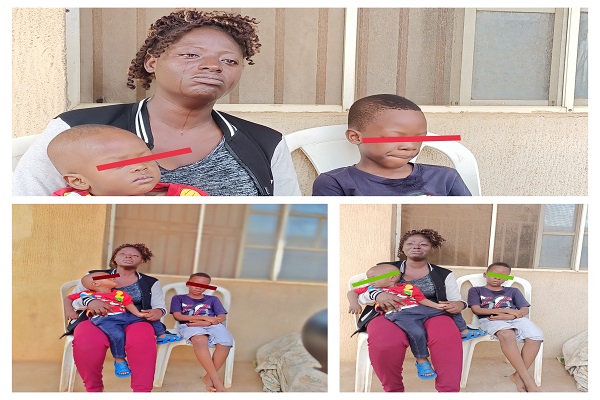 The wife of a sound engineer killed by a mob of okada riders has cried out for help.
David Imoh was lynched and set ablaze by a mob of motorcycle operators.
Imoh, 38, a sound engineer, was set ablaze by the mob over an argument on N100 last Thursday on Admiralty way in Lekki, Lagos.
His wife, Grace who has been left traumatised by the incident has appealed for welfare and support for her two kids — one year & five months and 5-year-old.
She told The Nation her husband’s killers have shattered and taken away her world.
She denied allegation that the deceased was a ritualist and kidnapper, insisting he worked as a sound engineer having studied Mechanical Engiennering at Yabatech in Lagos.
She told The Nation on Monday: “The last time I saw my husband was on 10th of May, My husband left for work on Tuesday morning, we parted at the bus stop and I came back to my parents place because I had to pick the children from school.
“Then on Wednesday, we spoke. Being a sound engineer he works with one of our churches in Lekki, Church of God Mission Garden City Lekki during the day. He also works with a band called legacy 360 band in the evening.
“Whenever he goes for a show, he sends me the location. Due to the programme I went for in my dad’s church at Ajao estate, we couldn’t speak but he sent me his location.
“So when I got home at night, I was calling him but I couldn’t get through to him. I felt he had a flat battery. Tll I slept, he didn’t call. On Friday morning, I called again and it didn’t go through.
“While going back to my dad’s church, I informed my siblings, I was worried. So I felt he was resting and besides he comes only on Sunday and leaves on Tuesday.
“It was on Friday afternoon around past three that I was called that I lost my husband. My elder brother and husband’s brother went to Maroko police station and the police told them my husband had a confrontation with one of the “Aboki” motorcyclists and my husband was stabbed and burnt as well because of a change of N100.
“I was told that one of them pushed the Aboki and the Aboki fell and pretended that he was dead. Before you knew it, a fight broke out and my husband was stabbed.
“It was later on Sunday evening that I saw some reactions on Twitter and lady who is part of the band was the one who narrated that my husband was not part of those who mounted the bike. He was inside setting up at the venue of the show, which was Thursday, 12th of May.
“Two guys (band members) took the bike and when they arrived at the venue, an argument happened between two of the guys and the Aboki.
“They gave the motorcyclist N500 and were to get a change of N100 but the bike man said he didn’t have change. They told him to take N300 but he refused and fight broke out.
“My husband was called. So, he went out to try and settled the issue. David is an helper, anyone who knows him can testify that David is a kind person.
“He came outside trying to intervene but when they saw that the motorcyclists were overpowering them, they had to run back inside the bar but the bar manager pushed them out. People were now shouting that they were ritualists and Yahoo boys.
“They subsequently beat and lynched them. All because he wanted to help settle a dispute. They have taken away my world. They have shattered it. Please Lagos Government, Governor Sanwo-Olu help me, I cry for justice and for the welfare of my children. Please come to my rescue.
“I’m a senior technical officer, level 9, at Ijede council at Works and Infrastructure department. I’m at my parents place. I’m helpless. I just rounded up my PGD progamme at FUTA.”
Another family member, who spoke to The Nation, Akinwande Dorcas, described the late David as gentle and generous.
“He was a kind-hearted person. When I heard about the news, I was shocked. The manner at which Imoh left is not worth sharing around. Every false tale on social media that he’s a ritualist or yahoo guy is a lie. He is into decorations and also sounds. All we need is justice for David.”
Pastor Bisi Adewale, the counsellor and mentor to the family, said he has known the deceased for about 15 years.
He called on Lagos State Government to curb the menace of Okada riders in Lagos.
“If justice is not done, many persons may be victims too. Many of these motorcyclists have weapons (daggers) with them. The State Government must also provide welfare for the kids because they are currently helpless.”
Top Stories