Nigerians wondered how someone declared wanted for alleged N117 billion fraud could be chosen to be PDP's candidate. 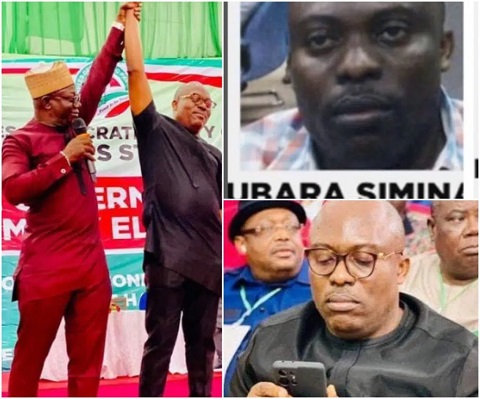 Nigerians have taken to social media to fume after Governor Nyesom Wike’s accountant-general, Similayi Fubara emerged as the candidate of the Peoples Democratic Party in the 2023 general elections even after being declared wanted by the EFCC.
He is accused of looting N117 Billion.
Fubara was picked by 721 delegates on Wednesday night to fly the People’s Democratic Party (PDP) governorship flag for 2023.
However, this has not gone down well with Nigerians who wondered how someone declared wanted for alleged N117 billion fraud, alleged criminal conspiracy, money laundering, misappropriation of public funds, and abuse of office could be chosen to be PDP's candidate.
See reactions below:
One kinghashthattag wrote; ‘Peter Obi do and come abeg…’
One tiffehey wrote; ‘Ahhhhh!!!!!!!!! Shambles’
One agwabumma_ wrote; ‘How come they are looking for him? when he’s available..’
Onee jeromesophia wrote; ‘Dear Efcc, una no know road to where them pdp dey do primaries for rivers state?
One sheen_merit wrote; ‘Aluta continue’
One teeto__olayeni wrote; ‘Haaaaaaaaa,can this country get any better tori Olorun????? And when he wins he will loot more money’
One gbolahanetti wrote; ‘The criteria na by who thief money pass…smh’
One taniamichealsits wrote; ‘the audacity for me’
One cintacharles wrote; ‘Nigeria my country’
Top Stories