The suspects, Korede Saheed, 29, and Yahaya Faisal, 22, were arrested in separate incidents between Magodo Estate and Otedola bridge, in Lagos State. 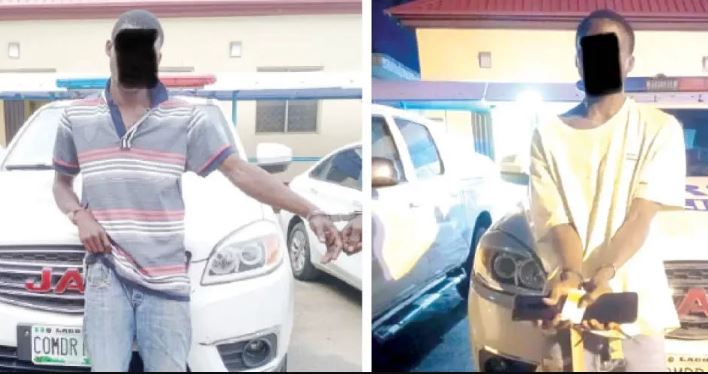 In what will come across as a really startling development, two very dangerous armed robbery suspects who were arrested by operatives of the Rapid Response Squad (RRS) in Lagos have confessed to selling stolen ATM cards to fraudsters who use same to empty the owners’ bank accounts, Daily Trust reports.

The suspects, Korede Saheed, 29, and Yahaya Faisal, 22, were arrested in separate incidents between Magodo Estate and Otedola bridge, in Lagos State.

In his confessional statement to the police, Korede admitted selling stolen Automated Teller Machine (ATM) cards to fraudsters at a giveaway price.

“We are only interested in the content of the bag or purse stolen, but we give ATM cards and credit cards found in any stolen bags to our 419 friends, at times for about N10,000. But most often they give us something if they succeed in using the ATM card to syphon money from a bank account.

“What the 419 do is simply dial a number and the USSD code of the owner of the account will pop up” he added.

Lagos State Police Public Relations Officer, Benjamin Hundeyin, who confirmed the arrest said luck ran out on the suspects when their victims quickly reached out to RRS officers on patrol in the area.

Hundeyin said the officers arrested the suspects and recovered one Samsung Galaxy S8 and one iPhone 12 from them.

He said Yahaya, who was found with different ATM cards, confessed that his gang robbed in traffic between Ojodu-Berger and Otedola Bridge.

“The Lagos State commissioner of police, CP Abiodun Alabi, has directed the Commander RRS, CSP Olayinka Egbeyemi, to transfer the suspects and exhibits to the CP’s special squad for further investigation.

“That would lead to the arrest of other fleeing gang members and their eventual prosecution,” he added.