Nottingham Forest Seal Promotion to Premier League After 23 Years Away


Nottingham Forest's promotion back to the premier league caps a brilliant turnaround to their season. 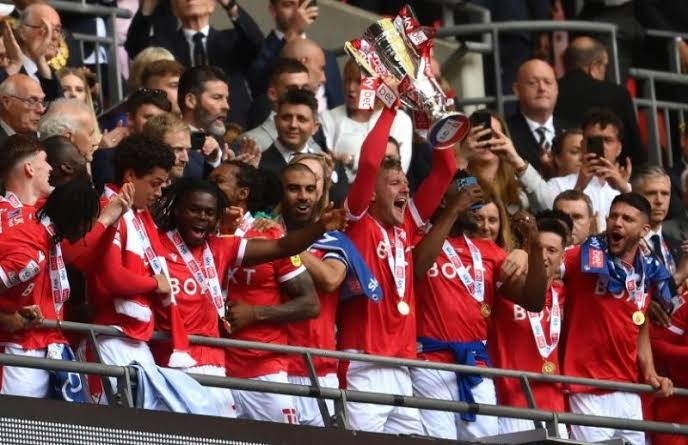 Nottingham Forest has been promoted to the Premier League after 23 years away.
This comes after a narrow win over Huddersfield Town in the Championship play-off final – a victory worth about £170m – at Wembley on Sunday, May 29.
Nottingham Forest's promotion back to the premier league caps a brilliant turnaround to their season, which had started with six defeats in seven. In the second half of the season, the club's football improved greatly earning them a place in the promotion playoffs.
They were not at their best in their first appearance at Wembley in 30 years but the game’s big moment went in their favour before the break.
The impressive James Garner, on loan from Manchester United, whipped in a dangerous ball from the inside left position and Town defender Colwill could only divert the ball past his goalkeeper Lee Nicholls under pressure from Ryan Yates.
Forest's golden period came under legendary boss Brian Clough, who led them to the English title in 1978 and won the European Cup in 1979 and 1980.
Having knocked Arsenal and Leicester out of this season's FA Cup before losing narrowly to Liverpool, Forest's sleeping giants have awoken from their slumber at last.
Top Stories