APC Primaries: The Moment Tinubu Ignored Osinbajo To Greet Buhari But Later Goes Back To Hail Him (Video)


The former Lagos state governor passed by Osinbajo, greeted the President and other party members 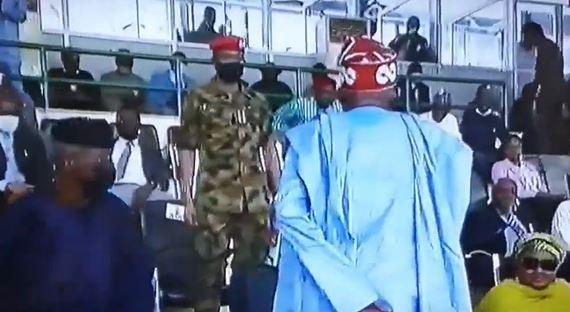 There was drama as the flagbearer of the All Progressive Congress, APC ignored Vice President, Yemi Osinbajo at the recently concluded primaries.

Tinubu left his seat to greet President Buhari who had just arrived at Eagle Square as the votes for the aspirants were being collated.

The former Lagos state governor passed by Osinbajo, greeted the President and other party members. He then walked back to his seat but was accosted by the Speaker of the House of Representatives, Femi Gbajabiamila, who told him he did not greet Osinbajo.

Tinubu immediately went back and greeted Osinbajo. Both men shook hands before he left for his seat.

Watch a clip showing the moment below...