My Ordeal At Côte d'Ivoire Border Was Painful — Nigerian Biker, Adeyanju Says After Riding From London To Lagos


Kunle, though said what the Côte d'Ivoire's immigration officer did was justifiable, he added it was painful to him because he was at the near end. 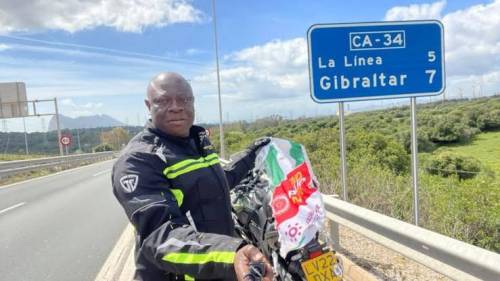 Kunle Adeyanju, the Nigerian man who embarked on a London-to-Lagos journey on a motorbike, has narrated his rejection at the Côte d'Ivoire border.

He noted that while on the journey, one of his painful moments was the ordeal in Cote D’Ivoire.

Kunle, though said what the Côte d'Ivoire's immigration officer did was justifiable, he added it was painful to him because he was at the near end.

In an exclusive interview with SaharaReporters, he said, "It was painful, it was hard coupled with fact that after riding 400km from Bamakog to the border; and only for you to be denied entry and asked to go back.

"For me to enter Côte d'Ivoire's, I needed a document which was issued to me by the Nigerian embassy in Mali. Côte d'Ivoire rejected it claiming that they were a sovereign nation of which Nigeria could not tell them who to allow into their country.

"It was the Côte d'Ivoire's ambassador, not the Nigerian ambassador that was supposed to issue me a lipase and they were right and it made sense. They were justified by their rejection, I stand on that because if it were Nigeria too, we won't accept it.

"But being the person at the receiving end, it was painful," Kunle added.

Recall that Adeyanju, a Nigerian and Rotarian, embarked on a charity ride from London to Lagos – a distance of about 12,000 kilometres.

He arrived in Nigeria on Sunday, May 29, 2022, stressing that he embarked on the journey to raise funds for #EndPolio in the country.

The biker who set off on his journey from London, United Kingdom on April 19 was greeted at the border between Nigeria and Benin Republic by a cheering crowd who had gathered to welcome him, after which, he proceeded to Lagos metropolis.