Unknown Gunmen Kill 1, Paste 'Sit-At-Home' On His Body In Anambra


Residents suspect that he was killed by members of the banned Indigenous People of Biafra (IPOB). 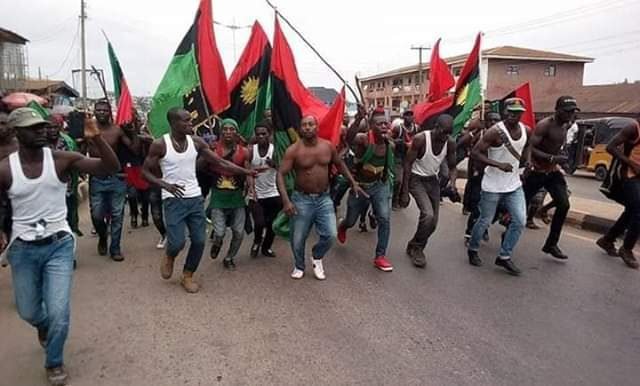 A man has been killed in Anambra state by unknown gunmen.
The incident it was gathered happened at Nkwelle Ezunaka community in Oyi LGA of Anambra State.
According to DailyTrust, the gunmen after killing the man left a “sit-at-home” note on his corpse which was dumped at the Triangle axis on the Onitsha-Otuocha road.
Residents suspect that he was killed by members of the banned Indigenous People of Biafra (IPOB).
According to a witness, “The man was brought to the scene at about 8am on Monday in a Lexus by about four armed men who shot into the air.
“The men who wore masks brought out the victim from the vehicle and shot him severally until he fell and died instantly.
“After killing him, one of them dropped a note on the corpse and they left. When we eventually came out of hiding to have a close look at the corpse, we saw that the note paper they dropped on the corpse bore, ‘Sit at home on Monday’.
“We also saw a police permit (sticker) for tinted windscreen vehicles that might have fallen from the vehicle of the gunmen as the Lexus had tinted windscreens.
“The items were later picked by officials believed to be security personnel.”
The state’s police spokesman, DSP Tochukwu Ikenga, said there was no such information available to him.
Top Stories