Here are eight Nigerians who are wanted by the International Criminal Police Organization, Interpol. 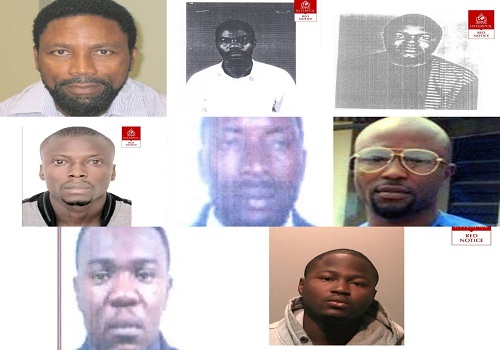 If a criminal flees to another country to avoid prosecution, Interpol will issue a Red Notice alert to all police worldwide about the criminal who is wanted internationally. The Red Notice is a request to law enforcement agencies all over the world to find and apprehend the culprit.

Here are eight Nigerians wanted by Interpol according to interpol.int;

Vitus, who was born on June 13, 1984 has been declared wanted in Angola and is accused of illegal possession of firearms, kidnapping and robbery.

59-year-old Salif has been declared wanted in China for drug trafficking.

Nkem, who was born on November 25, 1988, has been declared wanted in Canada on charges of sexual assault and failure to comply with the condition of his recognisance.

Okromi Festus was born on June 26, 1965 and he is wanted in India on charges of cheating and criminal conspiracy.

This 59-year-old is also wanted in India on charges of forgery of valuable security, possession of a forged document knowing it is forged and intending to use it as genuine, and forgery for the purpose of cheating.

Uzoma, who was born on August 11, 1973, has been declared wanted in Brazil for drug trafficking.

In Ghana, the 33-year-old man from Calabar has been declared wanted for robbery and rape.

Born on 30th June 1979, Malahi has been declared wanted in Angola for kidnapping, robbery and illegal possession of firearms.