Governor Ortom of Benue state spoke in an interview with Channels Television on Thursday June 30. 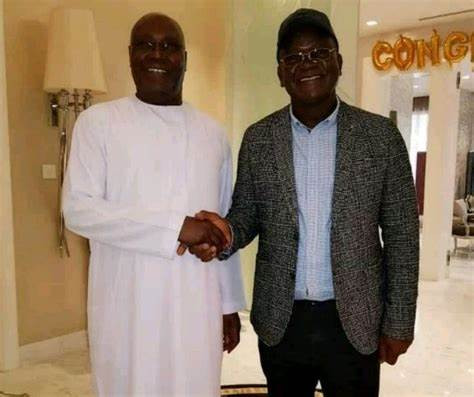 Governor Samuel Ortom has revealed that 14 out of the 17 members of a panel constituted to pick Atiku Abubakar's running mate preferred Nyesom Wike of Rivers state.
However, Atiku went ahead to choose Ifeanyi Okowa of Delta state.
Speaking in an interview with Channels Television on Thursday June 30, Ortom disclosed that the crisis is centered on the opposition party presidential candidate, Atiku Abubakar's choice of Governor Ifeanyi Okowa of Delta state, as his running mate in the 2023 election.
The Benue state Governor who revealed that 14 out of the 17 members of a panel constituted to pick Atiku's running mate preferred Nyesom Wike of Rivers state, added that if he (Atiku) was going to choose his running mate without considering the recommendations of the panel, the he shouldn't have set-up a panel.
Ortom said;
“Of course, three names were presented. In the order of preference, Wike, Okowa and governor Udom – all of them are qualified. But the preference was Wike – 14 members (referring to the committee) out of 17. This is the point we are making.
“Three of them were qualified but governor Wike was eminently qualified – 14 out of 17 members chose him. All these things were said during our meeting. We said that for the PDP to win, we needed governor Wike.
“Yes, Wike may have his own weak points as others may see it, but to some people, those were his strong points in this life. For me, the candidate who won the primary has the final say; he has decided. I have no problem with that.
“But I think that moving forward, Wike should have been reached out to and even some of us who are supporting Wike should have been told and convinced that ‘well, for this reason, we are deciding on this’.
“For me, post-nomination of vice-presidential candidate, the activity that followed is what I’m complaining about. Wike should have been reached out to. I should have been reached out to, and many other people who said that it should be Wike.
“I think it was the prerogative of the presidential candidate to decide. If he decided just like he did in 2019 by choosing former governor Obi without consultation, and it was accepted, he could have done the same thing.
“If he had a preferred candidate like Okowa — he is a good man and competent; he has been a senator and governor two terms, and he is my friend; in terms of qualification, Okowa is qualified — that would not have been a problem. He would have been accepted.
“But bringing all of us together, taking me from my state and taking several other governors from their states and bringing all of us to a committee — very responsible stakeholders, BOT, former governors’ forum and national working committee — and asking us to recommend, I think 14 out of 17 is enough to take a decision for anyone, whether you are a candidate or not.”
Top Stories