Apostle Chinyere while sharing some photos of the lady issued the terms of the marital contract.

General Overseer of the Omega Power Ministries, Chibuzor Chinyere has given conditions to any lady interested in marrying veteran actor, Kenneth Aguba.

Recall that the Port Harcourt-based clergyman gifted Kenneth Aguba a fully furnished apartment alongside free-feeding after reports that he was homeless went viral.

The pastor also promised to get a wife for the aged movie star very soon. 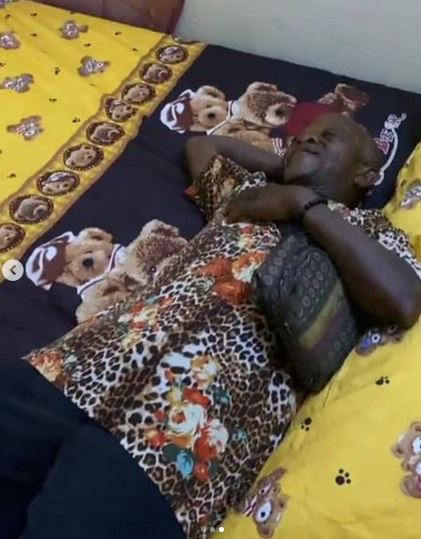 Following this development, a 24-year-old lady identified as Anastasia Michael Olamma took to social media to assert that she is willing to marry the actor.

Her post trended online and has now caught the attention of the pastor who has issued some conditions to any lady interested in tying the knot with Kenneth Aguba.

Apostle Chinyere while sharing some photos of the lady issued the terms of the marital contract.

Any beautiful lady that says she is ready to marry the actor, OPM will sponsor such marriage free of charge but, with terms and conditions.

Below are the conditions of marriage;

1. You must live with him for ten years after wedding without separation or divorce. Meaning; both of you must live together for 10 years. After 10 years, you are free to either remain in marriage or divorce.

2. You shall operate a joint account for the business OPM is opening for both of you .Meaning; For any bank withdrawals, both of you must go to the bank together.

3. You must never deny him access to perform his conjugal rights after wedding.

4. A team from the church would be visiting your home once in a month to ensure that everything is going on well and peaceful.

For any lady that agrees to these conditions, send your phone number so we can commence the marriage process then, move forward.” 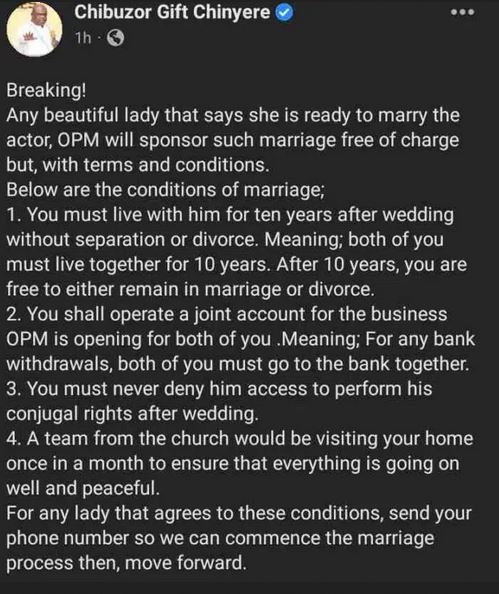