Terrorists Are Moving To Southern Nigeria To Take Refuge In Our Forests – Ondo Governor, Akeredolu


Akeredolu asserted that the only way to end insurgency in Nigeria is to have state police in the country. 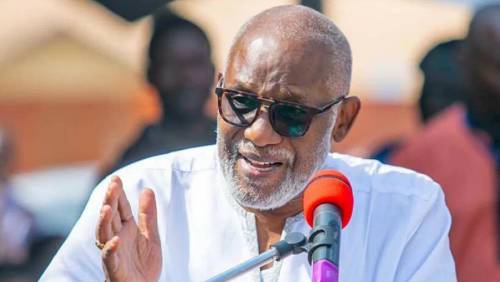 Mr. Rotimi Akeredolu, the Ondo State Governor, has made a new revelation about terrorists.

He revealed that disclosed that terrorists are relocating southward to take refuge in the forests.

Akeredolu asserted that the only way to end insurgency in Nigeria is to have state police in the country.

He contended that a regional security scheme will ensure the security of lives and property because the Nigeria Police Force is overstretched, understaffed and lacks the capacity to adequately secure the people.

He said this in his office on Thursday, while hosting the new Assistant Inspector-General of Police in charge of Zone 17, Yunnus Akeera.

"We can complement each other. I have had senior police officers who agree on state police. Maybe they can’t say it in public. Go to Ekiti and even here in Ondo State, most of the police stations have no vehicle. Look at the unfortunate incident that happened in Owo, police said they had no vehicle to pursue the perpetrators.

“Let us all sit down and agree that we should have a system that will create division of labour. We can have the federal police and then, the state police. You can face a major task like intelligence gathering and pass it to the state police to work on.

“What is happening, if not for lack of intelligence people will not go to Kuje and attack the place in Abuja. We need your cooperation too in this our cry for a dual police system that we can work together. People are moving down south to take refuge in our forest. You don’t have the men and officers to secure the country. Police is understaffed. We appreciate your limitations in terms of men, ammunition and so on.”