Jibrin, who hails from the Gezewa local government area of Kano state, said he sold his farmland just to go for the pilgrimage “but some unruly leaders made it impossible”. 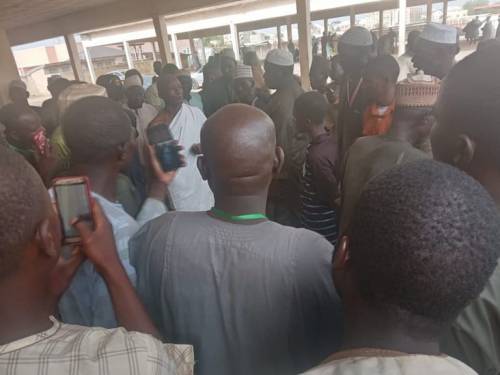 An intending pilgrim, Malam Jibrin Abdu, who was supposed to travel to Mecca for his pilgrimage has been spotted performing hajj in Kani.

Jibrin, who could not board a flight to Mecca, Saudi Arabia due to some irregularities from the stakeholders declared that he was going to perform and complete his pilgrimage at the Hajj Camp in Kano.

Jibrin, who hails from the Gezewa local government area of Kano state, said he sold his farmland just to go for the pilgrimage “but some unruly leaders made it impossible”.

He was sighted dressed in a white robe and declaring that he had already started his pilgrimage at the Kano Muslim Pilgrimage camp.

It was gathered that at least 745 intending pilgrims were left stranded at the Malam Aminu Kano International Airport (MAKIA) in Kano on Thursday after the last Saudi-bound flight departed the airport at 3:45 pm.

Meanwhile, the Executive Secretary of Kano State Pilgrims Welfare Board, Muhammad Abba Danbatta, who also missed the pilgrimage, along with several directors of the board, blamed the last-minute disappointment on the failure of the National Hajj Commission (NAHCON) of Nigeria (NAHCON) to honour the rescue mission arrangement after the initial disappointment from Azman Airline, which led to an extension by the Saudi government.

SaharaReporters earlier reported that some Nigerian pilgrims to Saudi Arabia had lamented the non-provision of accommodation for them since the day they arrived in the Holy land.

According to a video seen by SaharaReporters, the Muslim pilgrims who claimed to be from Kwara State said they had been without accommodation because the stakeholders could not make provisions for them.

One of the women in the video is heard, lamenting, “They didn't give us hotel or any accommodation. We have been sleeping outside."

A relative of one of the victims told SaharaReporters that they had also lodged a complaint with the State Welfare Pilgrims Board concerning the issue.

He said the Kwara State Amir Hajj, Awa Ibrahim, claimed that it was not the responsibility of the state board to make such provisions.

"The man told us that accommodation for the pilgrims is the responsibility of the National Hajj Commission," the relative told SaharaReporters

SaharaReporters gathered that the National Hajj Commission announced earlier this year that, “Nigerian pilgrims for 2022 Hajj from Southern Nigeria are to pay N2,496,815.29, while their counterparts from the Northern part of the country will pay N2,449,607.89.

“For Adamawa and Borno states, they are to pay N2,408,197.89 due to proximity to Saudi Arabia. The air ticket cost is the major difference in the Hajj fare.”

The NAHCON Chairman, Alhaji Zikrullah Kunle Hassan, during an extraordinary meeting with Chief Executives of Muslim Pilgrims’ Welfare Boards in the NAHCON Hajj House headquarters in June, made the announcement.