The seven months pregnant woman was allegedly r*ped and some items were carted away by the assailants. 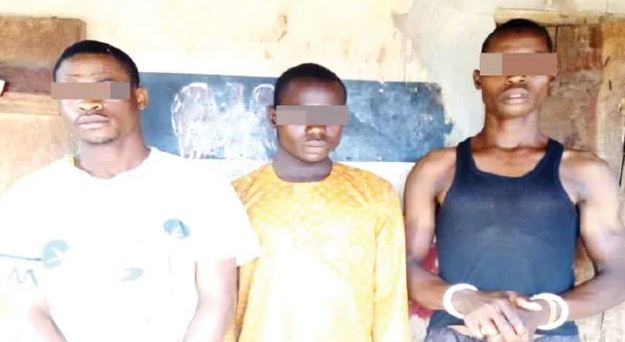 Three men have been arrested by the Nigeria Security and Civil Defence Corps, Kwara State, for allegedly having unlawful carnal knowledge of a seven-month pregnant woman in Woro village in the Kaiama Local Government Area of the state.

The suspects: Lawal Ibrahim, 25; Mohammed Issa, 19; and Ibrahim Ahmed, 20; were also alleged to have robbed the woman and her husband.

The Public Relations Officer of NSCDC in the state, Ayeni Olasunkanmi, who confirmed the incident, said one of the three suspects, Lawal, was arrested while trying to sell some items stolen from the home of the couple.

He said, “A case of r*pe and robbery was reported on July 5 at the NSCDC Woro Outpost. The crime was reported to have happened at Woro village in Kaiama LGA around 2am.

“The victims: a seven-month pregnant woman and her husband were allegedly attacked by the suspects in their house at Woro. The seven months’ pregnant woman was allegedly r*ped and some items were carted away by the assailants.

“Upon getting the report, the state Acting Commandant, DCC Jonah Gabriel, gave an order that the perpetrators be fished out.

“Luck ran out on the suspects as one of them, Lawal Ibrahim, was arrested by our men while he was trying to dispose the stolen items.

“The apprehended suspect gave some confessional statements, which eventually led to the arrest of the other two suspects.”

Ayeni said the suspects were arraigned before an area court in Kaiama.