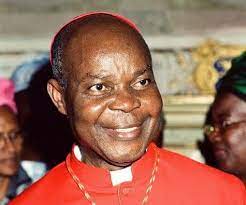 A former President of the Christian Association of Nigeria, Cardinal Anthony Olubunmi Okogie has broken his silence on the controversial Muslim-Muslim presidential ticket of the All Progressives Congress (APC).
Recall that APC presidential candidate, Bola Ahmed Tinubu has been receiving serious condemnation since he picked former Governor of Borno State, Kashim Shettima, as his running mate for the 2023 general elections.
The decision has attracted a barrage of reactions from concerned Nigerians, religious groups and socio-cultural organisations both on and off social media.
Speaking with The Punch on Thursday, Okogie stated that ethnicity and religious sentiments play a key role in Nigeria’s politics, describing the development as unfortunate.
The vocal cleric stated that competence should determine who governs the country and not ethnoreligious sentiments.
He, therefore, urged the electorate to vote for political parties and their candidates in the 2023 general elections based on the impression of them.
Okogie said, “Put simply, competence should be the defining factor for any government and not ethnoreligious sentiments. Unfortunately, ethnoreligious sentiments play a key role in Nigeria’s politics.
“In the final analysis, the voters make the choice so whatever impression and/or expression about any of the candidates and political parties should be expressed by either voting for or against them.”
Top Stories