Speaking about the Labour Party presidential candidate, Mr Peter Obi, Lady Onyemelukwe revealed that she knows Mr Obi and his family in person, that Peter Obi is a kind, honest and straightforward man. 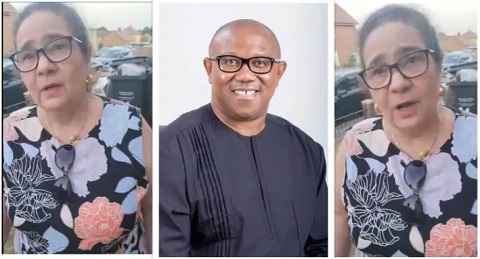 A British woman has urged Nigerians to vote for Peter Obi to become President in 2023.
The woman identified as Lady Mrs Onyemelukwe, a British woman who speaks Igbo language fluently and married to an Igbo man revealed why she believes Obi will do a good job.
According to the woman who spoke in fluent Igbo, Obi is a straight forward a kind man, the type of man Nigeria needs.
In a brief introduction she did about herself, she said she’s Bristish, but married a to Nigerian man, from Mkpoka, Nnewiichi, Nnewi, in Nnewi North Local Government Area of Anambra state.
During her interview, Lady Onyemelukwu urged her Igbo audience to participate fully in the forthcoming 2023 general election and make sure that Mr Peter Obi wins and becomes the next president of Nigeria.
While speaking on the former vice-president, Atiku Abubakar, Lady Onyemelukwe stressed that the PDP presidential candidate, marrying wives from several tribes of Nigeria isn’t a quality that should be used to qualify a president worthy candidate.
She said that it is in fact, a wastage of Nigerian resources, adding that several of those wives he married are not living with him, some are living in Nigeria and other countries like Dubai, and they and their kids needs money for upkeeps.
She added that she knows Mr Obi and his family in person, that Peter Obi is a kind, honest and straightforward man.
Watch video below:
Top Stories