Felix Morka, said the buck stopped at Jonathan’s desk for failing to take decisive steps to finish the insurgency at the incubatory stage. 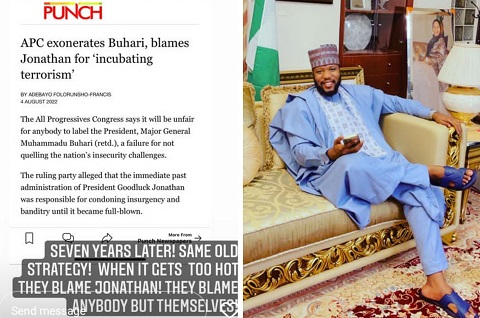 The All Progressives Congress has been lambasted by Abdullahi, the son of Bauchi State Governor, Bala Mohammed.
He slammed the All Progressives Congress (APC) for reportedly saying former President Goodluck Jonathan is to be blamed for the security challenges Nigeria is currently facing.
The ruling party had said it will be unfair for anybody to label the President Buhari a failure for not quelling the nation’s insecurity, and alleged that Jonathan was responsible for condoning insurgency and banditry until it became full-blown.
In an interview with Punch, APC National Publicity Secretary, Felix Morka, said the buck stopped at Jonathan’s desk for failing to take decisive steps to finish the insurgency at the incubatory stage.
"It was the same Jonathan administration that incubated Boko Haram to a point where it became a fighting force. Many of them who are in that party really should be hiding their faces by now. Jonathan would never have survived the onslaught if he was not defeated by election. A lot of issues we are talking about today were incubated by the same individuals and party when they were in government," Morka said.
Reacting to the report via Instagram story on Thursday August 4, Abdullahi wrote; "Seven years later! Same old strategy! When it gets too hot they blame Jonathan. They blame anybody but themselves!" 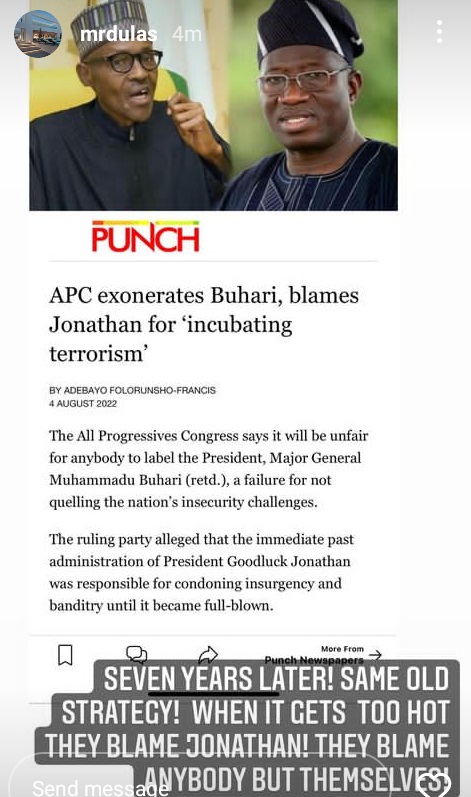