The patriarch of Omatseye family in Warri, Delta State, Professor Jim Nesin Omatseye made the appeal on Friday. 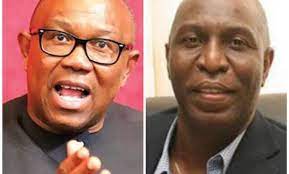 The family of journalist, Sam Omatseye has pleaded on behalf of the journalist.
The patriarch of Omatseye family in Warri, Delta State, Professor Jim Nesin Omatseye appealed to those who disagree with the article titled: “Obi-tuary by Sam Omatseye” not to harm their son.
Reacting to the development on Friday on phone, he noted that it is not out of place for people to disagree with a journalist’s opinion, pointing out that the writer, like every other person, is entitled to his opinion.
He said: “I want to react to the negative reaction that is coming from many quarters as a result of the article Obi-tuary, which was written by Sam Omatseye, who is a member of my family.
“The reaction that is trailing that publication, I believe, it’s as a result of what is happening in the country; the state of insecurity, the high level of poverty, the suffering of so many people. And as a result of this, people are looking for change, whether from the right or from the left.
“The regular parties have people who have disappointed a lot of people in the country as a result of these challenges and people are looking for change.
“Whatever it is that Sam has written, it’s his personal opinion to which he is entitled. But he should not be threatened by anyone because he’s doing his job as a journalist.
“It is not all the time that what journalists say, everybody agrees with. Therefore, we want to say, from the perspective of the family that he should not be threatened or harmed by anyone.
“We plead with the public and those who disagree with him, to not do anything that will be detrimental to him”.
Top Stories