Luckily for the mob, the suspects’ tricycle developed a fault and stopped functioning, making the suspects easy catch for the mob who instantly damaged the motorcycle and threatened to burn the suspects alive. 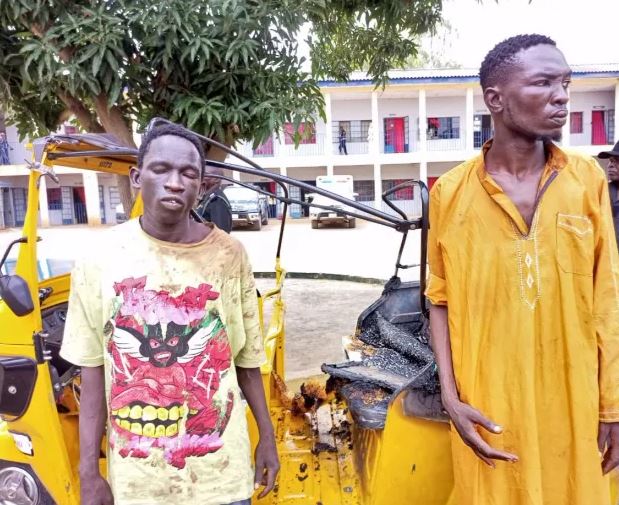 Three youths in Yola, the Adamawa State capital, got more than what they bargained for after they snatched someone’s phone but were attacked by an angry mob after they tried to escape and their tricycle was damaged.

Two of the youths and their tricycle (Keke NAPEP) are now with the police while the third is yet to be arrested.

The three-man gang allegedly snatched a phone from a young lady at the Jippu Jam roundabout in Yola Town, Yola South LGA, on Monday, August 8.

The boys, who were arrested, being two of the 38 suspects paraded by Commissioner of Police Sikiru Akande on Tuesday, had stormed the scene of the crime in a tricycle, and saw their victim seated in front of her shop busy with her phone.

The boys, it was learnt, stopped their tricycle and Abdul-Azeez alighted and pretended to be interested in buying something.

To dispossess the lady of her android phone, Abdul-Azeez followed from behind and snatched the phone, ran back to their tricycle and fled the scene.

The lady raised an alarm which attracted the mob who jumped into their own tricycles and cars and pursued the suspects.

Luckily for the mob, the suspects’ tricycle developed a fault and stopped functioning, making the suspects easy catch for the mob who instantly damaged the motorcycle and threatened to burn the suspects alive.

It was learnt that Abdul-Azeez managed to escape the instant the tricycle stopped working, but the mob was able to get hold of the other two and handed them to the police.