The Commissioner of Health, Prof Augustine Umoh and BA-N Program Officer, Dr Lucy Bernard, said these in their separate addresses on Monday, presented at a two-day training. 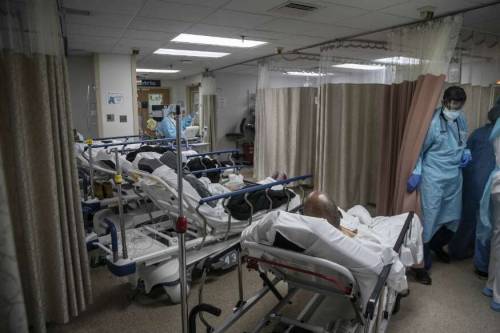 Clerics in Akwa Ibom State have been tasked to refer their members to hospitals.

The Akwa Ibom State government and a USAID-funded project in the state, Breakthrough Action-Nigeria, have called on religious leaders in the state to always refer their sick members to the hospital, instead of retaining them in their prayer houses.

The Commissioner of Health, Prof Augustine Umoh and BA-N Program Officer, Dr Lucy Bernard, said these in their separate addresses on Monday, presented at a two-day training.

The training was organised by the state government in conjunction with BA-N for religious leaders on priority practice behaviour in malaria, tuberculosis and COVID-19, held in Uyo, Akwa Ibom State.

Prof Umoh said the call became necessary following rising cases of avoidable deaths due to failure of patients to get medical attention in time as most of them run to their pastors and Imams for prayers instead of going to hospital for proper tests and treatments.

He said considering the influence these religious leaders (pastors and Imams) wield on their followers, they should use it to change people’s health-related social behaviours and strengthen community participation during pandemic and emergencies.

“I urge you to take advantage of the training and take the key messages for dissemination to your various constituencies and congregations.

“Averagely, a child dies every two minutes from malaria while tuberculosis kills about 18 persons per hour.”

In her remarks, Bernard, regretted that some pregnant women in the state especially multiple birth mothers do not register for antenatal clinics early as they claim they know everything about childbirth.

She said some do not only register at the 32nd week of pregnancy but go to traditional birth attendants largely run by faith-based organisations.

“We encourage our people to go to the clinic. We had the situation of a woman who lost her twins in TBA. Upon delivery, there was a placenta retention which is far beyond traditional birth attendants.

“The TBAs are also faith-based. Some women who manage to come to a clinic when you give them drugs will say, ‘No, I must go back to my TBA, so that she can unlock me before I can take the drugs.’

“These are the issues we are having. We are talking about giving SP to pregnant women for malaria prevention,” she said.

However, the state coordinator of BA-N, Bassey Nsa, who spoke with newsmen, said the organisation recognizes the important role of religious leaders in behaviour change of their association hence their involvement in the health programmes.

“We’ve been working with religious leaders for a long time. They have been creating awareness and referring people to hospitals to access health services. They integrate all these messages into their religious sermons,” he said.

Also speaking, the senior pastor of Insight Bible Church, Pastor Sylvanus Ukafia, also a medical doctor, said pastors who fail to encourage their members to go to hospital could be as a result of ignorance.

He said, “I am a pastors’ trainer. Why we are here is to see how to influence a behaviour within our community so that men of God can respond right to medical issues.

“We look at where we are lagging behind as pastors and how we can interact with other pastors who are doing anything risky.

“We’ll keep working with them until they understand what the scripture says. It’s basically ignorance!

“The Bible says men doing good like medicine. We are trying to reach such pastors knowing that if we don’t reach them, they are going to mislead the people and that is why we are actively working with them. It is something we can work out.”

Also, Alhaji Ahmed Isa of the State Council for Islamic Affairs said the training has given them room to disabuse the minds of his people on so many myths and misconceptions about going to hospital.

Isa, who admitted that the level of access to medical services by his people were low, promised to change the narrative by passing the information across to them through sermons and other available mediums.