Five years after she welcomed him back, he reportedly looted everything she has worked for and ran off again. 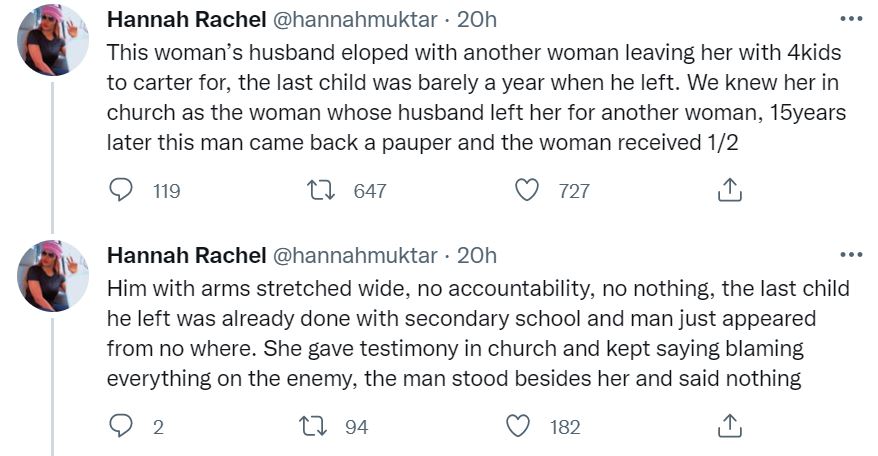 A Twitter user has taken to the microblogging platform to recount how a man left his wife for the second time after looting everything she struggled for.

According to @hannahmuktar, the man eloped earlier with another woman, leaving his wife with four kids to cater for.

The Twitter user further revealed that the man returned to his wife 15 years after as a pauper. Five years after she welcomed him back, he reportedly looted everything she has worked for and ran off again.

Read the tweets below...

''This woman’s husband eloped with another woman leaving her with 4kids to carter for, the last child was barely a year when he left. We knew her in church as the woman whose husband left her for another woman, 15years later this man came back a pauper and the woman received him with arms stretched wide, no accountability, no nothing, the last child he left was already done with secondary school and man just appeared from no where.

She gave testimony in church and kept saying blaming everything on the enemy, the man stood besides her and said nothing

The church including the pastor said it was the handiwork of the enemy and all. He asked them both to kneel on the alter and said we should pray for them, so appalling yeah??? Well 5years after his return, he has looted everything she’s worked for and ran off again. Masha Allah.''