The female bishop captured at the unveiling of the APC vice presidential candidate was seen in a recent video engaging in what many termed 'a worldly activity'. 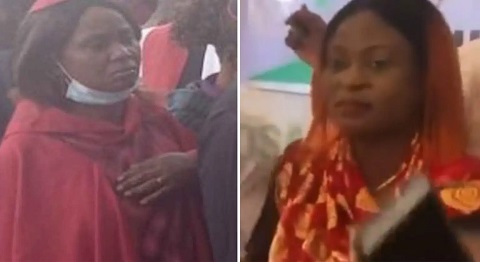 Nigerians on social media have attacked Festus Keyamo on Twitter over a video he posted online.
In the video, internet users identified one of the Bishops present at the unveiling of All Progressives Congress (APC) vice presidential candidate, Kashim Shettima was seen engaging in a controversial event.
She was seen in the midst of Edo APC chieftain, Tony Kabaka singing a version of Emi lokan to declare support for the presidential candidate of the ruling party, Bola Ahmed Tinubu.
Recall that some weeks ago, the female bishop was captured at the unveiling of the APC vice presidential candidate.
The Christian Association of Nigeria denied the clergymen and women alleged to have been hired by the party.
See video and reactions below:

When the jungle matures, we shall turn their mockery into songs of victory!!! We are getting ready!! Edo for ⁦@officialABAT⁩ ✌️ pic.twitter.com/6TKLgKx9b9

Bishop in the Day, Emilokan at night. pic.twitter.com/8iiwm32Rgt

APC and criminals are 5&6
We all remember Kabaka from that BBC cultist documentary and ofcuz our fake female bishop. pic.twitter.com/nPonHELHqg

So the notorious cultist in the @BBCAfrica documentary on Black Axe, Kabaka (on blue cap) and the female bishop at Shettima's unveiling, are now ur frontline campaigners? How low is too low for you guys? I'm awed at the speed at which you morphed from an activist to a dark soul