The defendant, who was given an opportunity to address the court, pleaded for mercy, telling the court that he had since been engaging in a legitimate business. 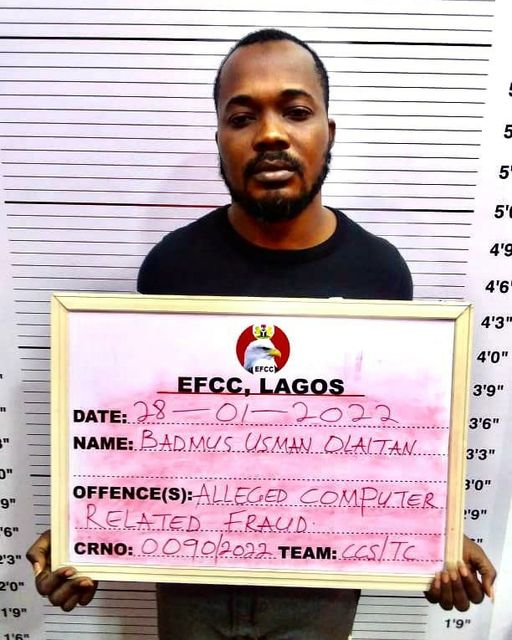 An internet fraudster, Badmus Usman Olaitan has been sentenced to prison.
The Lagos Zonal Command of the Economic and Financial Crimes Commission, EFCC, on Wednesday, August 17, 2022, secured his conviction and sentencing.
Olaitan was sentenced to one year in prison for romance scam before Justice O.O Abike-Fadipe of the Special Offences Court sitting in Ikeja, Lagos.
Olaitan was arraigned on an amended one-count charge.
The count reads: "Badmus Usman Olaitan, on or about the 20th day of January 2022 in Lagos, within the jurisdiction of this Honourable Court, with intent to defraud, had in your possession a document titled Google account personal info and other related documents for romance dating scam printed from your gmail account, which you knew to be false."
He pleaded “guilty” to the charge.
The prosecuting counsel, I.G. Akhanolu, gave a review of the facts and also urged the court to convict him as charged.
He told the court that the defendant was arrested on January 20, 2022 at the Ipaja area of Lagos State, following actionable intelligence received by the Commission about his involvement in internet fraud.
According to him, the defendant was subsequently brought to the EFCC's Lagos office, where mobile devices found on him were forensically analysed and his statement taken.
"He was further interrogated and he admitted to engaging in a romance scam," he said.
Akhanolu further told the court that the defendant admitted to benefitting the sum of N1million and had restituted the sum of N700, 000 through a First Bank manager's cheque in favour of the EFCC Recovery Account.
He tendered in evidence the statements made by the defendant, the mobile phones recovered from him and a copy of the manager's cheque.
He also told the court that a Lexus ES 300 2003 model, in addition to the mobile devices, was also recovered from the defendant, adding that “he admitted that all were proceeds of his illegal activities.”
The statements of the defendant, the fraudulent documents printed from the devices and a copy of the manager's cheque were tendered in evidence by the prosecution and admitted as exhibits against him.
Justice Abike-Fadipe found him guilty as charged.
The defendant, who was given an opportunity to address the court, pleaded for mercy, telling the court that he had since been engaging in a legitimate business.
"I was misled into engaging in Internet fraud by my friends," he said, as he promised never to go back to the fraudulent activities.
Justice Abike-Fadipe sentenced him to one year in prison and gave him an option of fine of N500, 000 and 40 hours of community service.
Items recovered from him were also ordered forfeited to the Federal Government.
Top Stories