The Nigerian-international was subjected to racist chants by some section of the home fans inside the Marc’ Antonio Bentegodi Stadium on Monday night’s Serie A clash. 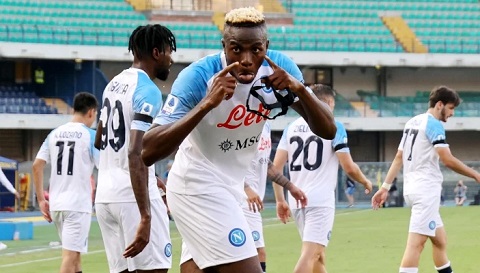 Serie A club, Hellas Verona have been fined.
Verona was fined €12,000 after their fans racially abused Super Eagles and Napoli striker, Victor Osimhen.
Recall that the Nigerian star was subjected to racist chants by some section of the home fans inside the Marc’ Antonio Bentegodi Stadium on Monday night’s Serie A clash.
Napoli won the thrilling encounter 5-2 with the Nigeria international scoring one goal and also grabbing an assist to his name.
Osimhen also mocked the fans by making a funny face as he celebrated his goal with his teammates.
According to an Italian publication, el grafico, the league’s disciplinary commission found the home side guilty and has hit them with a fine.
“Hellas Verona was fined €12,000 for considering that it allowed its fans to carry out racist chants against the player Victor Osimhen, from Napoli, during the match between the two teams for the first date of Serie A of Italian football.
“After the first day of Serie A 2022/23, an investigation into Hellas Verona-Naples was opened with the Federal Prosecutor’s Office, which considers it necessary to clarify and identify those responsible for the first racial discrimination choirs against a Napoli player.”
“it was decided to sanction Hellas Verona club with a fine of 12,000 euros for making its followers, during the match, repeatedly sing insulting choirs of a territorial matrix towards the opposing team (Napoli), “ reads a statement released by the Federal Prosecutor’s office.
Last season Verona were ordered to close a section of their stadium for one match after racist chants from a section of their supporters.
Osimhen has been subjected to racist chants by opposing fans since his arrival in Italy in 2022 from Ligue 1 club, Lille.
Top Stories