He was apprehended in the popular Tombia area after a failed attempt to sell stolen farm produce. 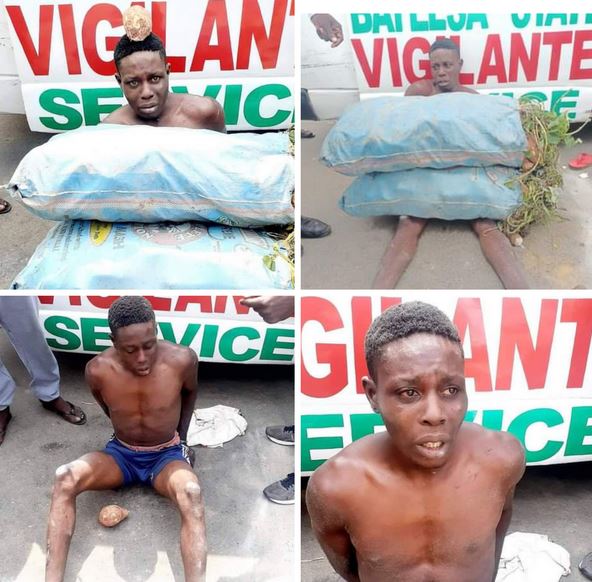 A 23-year-old man who invades farmlands and allegedly harvests and steals farm produce for sale has been nabbed by men of the Bayelsa State Vigilante Security Outfit.

The suspect, whose name was simply given as Dinikpeke Orufa, and a native of Polaku community, Yenagoa Local Government area of the state, was apprehended in the popular Tombia area after a failed attempt to sell stolen farm produce.

According to the State Vigilante Chairman, Doubiye Alagba, while handing over the suspect to the Akenfa Division of the Nigeria Police Force, Bayelsa State Command, his team had been trailing the suspect since last week after a female farm owner traced her stolen produce to the popular Tombia market and raised an alarm of someone stealing her produce.

Alagba said, “The incident almost caused a crisis in the area but was resolved amicably between the trader and the farmer as the trader paid for the product again, so we decided to put our search bim on the suspect. He will dress like a farmer, bring stolen farm produce to the market just to convince his buyers that the products are from his farm.”

“After he succeeded last week, in the early hours of today, he brought a stolen potatoes farm produce which our investigation showed he stole from a farm along the Igbogene tollgate area of the state. On getting to the market this time, he was quickly identified and was arrested by our operatives stationed at the Tombia roundabout market area”