BBNaija: It's Not Easy - Chichi Says As She Break Down In Tears Over Punishment (Video)


The dancer was seen crying after receiving another punishment for failing to finish her first task on time. 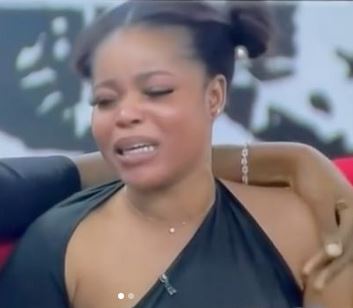 BBNaija Level Up housemate, Chichi broke down in tears on Friday over a punishment from Biggie.

The dancer was seen crying in a video uploaded on social media, after receiving another punishment for failing to finish her first task on time.

In the video, Chichi who looked defeated shed tears while other female housemates consoled her.

Before then, Chichi got emotional over a heated discussion with fellow housemate Deji who told her he was no longer interested in pursuing a relationship with her.

He described Chichi as “loud and too much”, following a fight the latter had with Diana.

The fight started on Sunday night after the housemates were merged by Big Brother host Ebuka Obi Uchendu which led to the scarcity of lockers for the housemates.

Deji who has gotten close to Chichi in the house decided to share his locker with Diana which got Chichi upset.

In a viral video on social media, Chichi and Diana are seen exchanging words and cursing each other after the former found Daina’s eyelashes and other personal items in the locker.

Watch a video of her crying below;