City Round gathered that normal activities were ongoing in the mall when customers and workers started perceiving the smell of burning substances. 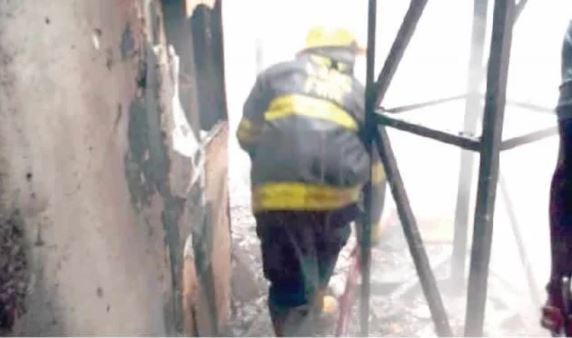 The Film House Cinema located at the Apapa Shopping Mall in the Apapa area of Lagos State was gutted by fire on Friday.

City Round gathered that normal activities were ongoing in the mall when customers and workers started perceiving the smell of burning substances.

It was learnt that emergency workers alongside curious customers in the mall traced the smell of the burning substances to the cinema that had been abandoned for a while.

Upon the discovery, a temporary shutdown of business operations in the mall was ordered as customers and workers in the mall were told to vacate the building.

Speaking with our The PUNCH, a source in one of the shops in the mall, said the fire started around 11am, adding that the situation threw customers and workers into a panic.

He, however, noted that no life was lost in the incident, adding that it took the intervention of firefighters to put out the fire.

The source said, “The fire started around 11pm and based on what I gathered, the fire occurred at the film house’s shop in the mall. Some people said the fire was caused by an electrical fault.

Contacted, the Director, Lagos State Fire and Rescue Service, Margaret Adeseye, who confirmed the incident, said it took a long time for people to discover that fire was burning in the cinema because it was abandoned.

She also noted that there was no causality recorded in the incident.

She said, “The Film House Cinema is not in use. By the time we were alerted and got to the place, we realised that the fire had burnt for quite some time. Almost every abandoned material in there was already burnt to ashes. The mall is a one-storey building and the film house is housed at the upper floor of the one-storey building.’’

Speaking on the cause of the fire, Adeseye said the cinema could still have electrical current supplied in its premises, adding no one was using the power supply as the place had been abandoned for some time.

Adeseye said, “We are still trying to unravel the possible cause. We got the fire alert around 11.50am and the fire was extinguished around 2pm.  No life or injury was recorded,”