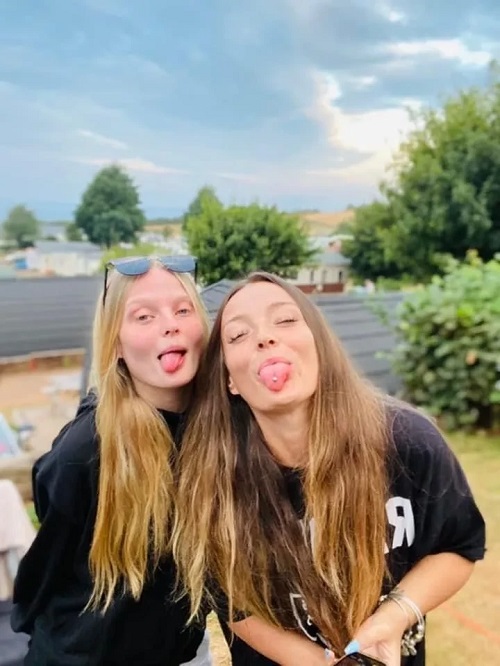 A mother has died suddenly while celebrating 36th birthday.
It was gathered that the woman died from a mystery illness, leaving a heartbreaking note to her daughter despite not knowing she was sick.
Hayley Thompson, from Burnage, south Manchester, tragically died in August while holidaying in Devon.
On her supposed birthday, Hayley became unwell after returning to her tent with her partner, Adam Woodhall. When she went to use the bathroom, she suddenly fell to the floor.
Paramedics were called but it was already too late. Hayley suffered three seizures and was pronounced dead inside her tent at Ladram Bay Holiday Park in Budleigh Salterton.
Now her family have revealed she posted a TikTok video telling her daughter Ciana (pictured  left) exactly what to do if she “died young” just months before her death.
The note reads “If I die young… Give my jewellery to my baby.

“Know that I was happy. Everyone is to wear yellow to the funeral.
“No socks or ties, I want FULL yellow suits or dresses. I want a DJ at the after party. If anyone calls it a wake you’re barred.
“Remind Kiana and Adam everyday how special they made my existence. I love my family, never forget.
“Wherever you see sunflowers I will be there.”
Although Hayley had been unwell in the years leading up to her death, her family had no idea how serious her condition really was.
In 2016, she vomited blood and was referred to hospital for checks, that was when doctors discovered scarring on her liver but they had no idea what was causing it.
Following several hospital visits, it was determined that Hayley should be placed on a waiting list for a liver transplant.
Her family didn’t know that without a transplant, her mysterious condition was fatal.
Hayley was called to hospital for a potential liver match twice, but sadly neither of them were the right size for her. Due to being let down several times, her family say she just wanted to “enjoy her life to the max”.
Her sister, Liah Thompson, said: “For the past two years she was with her partner, she was just really enjoying life. Before 2016, she used to be quite a large girl. She lost loads of weight. Because of that, she got herself to a point where she was really happy and content in her life.
“We all knew she needed a transplant but we didn’t think it was needed as soon as it was. I think she downplayed it a lot; I think she wanted to live her life because she had been called for transplants before and was disappointed. She just wanted to enjoy herself and I think that’s what sits well with me, that she was happy.”
A Disney fanatic, Hayley was known as someone who would “do anything for anyone” and had a “heart of gold”.
Liah, a mum-of-three, said: “After it all happened, we found a TikTok video saying: ‘If I die young, just know I was happy'. It’s quite heartbreaking.
"I know it’s a bit of a trend, but my sister was really thinking that. Hayley was such a lovely woman with a big heart who would go out of her way to help you whenever she could.”
Liah said: “It’s been hard. It’s been crazy; it’s been like a rollercoaster. I’m still trying to get my head around it. Because she’s passed away and she's all the way in Devon, we just want her home. I just want to lay her to rest as soon as possible. It breaks my heart.”
Top Stories