Adebowale, after perpetrating the crime, allegedly dumped Agbovinuere’s corpse in a bush, and stole the victim’s Toyota Voltron car. 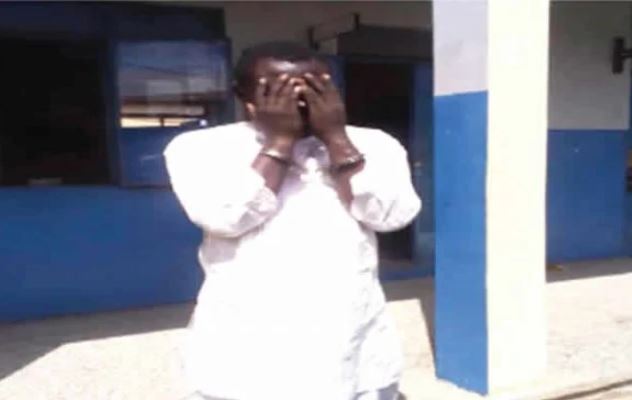 A medical doctor, Abass Adebowale, has been paraded by the Edo State Police Command on Wednesday.

He was paraded for allegedly injecting a cab driver, Emmanuel Agbovinuere, to death in the Benin City area of the state.

Adebowale, after perpetrating the crime, allegedly dumped Agbovinuere’s corpse in a bush, and stole the victim’s Toyota Voltron car.

He was said to have driven the car to the Osogbo area of Osun State where policemen arrested him on Monday.

The state Police Public Relations Officer, Chidi Nwabuzor, while addressing the press at the police command’s headquarters in Benin City, Edo State, said Adebowale, was a graduate of the University of Ilorin, Kwara State, and works with the Kaiama General Hospital as a medical officer.

He said, “The Edo State Police Command in an attempt to rid the state of crime and criminality arrested a medical doctor, Abass Adebowale, 36, for killing Emmanuel Agbovinuere, 39, a cab driver.

“The victim and the suspect met in July this year at an undisclosed hotel in Benin and that is where their relationship started. On Sunday, September 4, the suspect came from Kwara State and they met at the same hotel, where as a customer, he took him around to where he was to do his business.

“The cab man complained of leg pain and the doctor promised to help and injected some poisonous drugs in his system. That was what killed him instantly. For him to conceal the crime, he left the corpse in the man’s Toyota Voltron car, but later took the corpse to Ondo Road, Oluku, Edo State, and dumped the corpse there.

“When the Anti-Kidnapping Unit got notice of what happened, they mobilised and he was arrested in Osogbo, Osun State, with the deceased car.”

Adebowale, during the parade, said the victim’s death was not deliberate, adding, “I pray that the family find a place in their hearts to forgive me.”

Agbovinuere was said to have been survived by his wife, Mary, 27, and two children.

Opalola said, “The suspect in the course of his stay in Benin after selling his car, injected his friend with a substance suspected to have killed him on September 03, 2022.

“He subsequently dumped his corpse in a nearby bush and took away his white Toyota Camry muscle. Luck, however, ran out on him when the vehicle driven by the suspect was intercepted by police operatives along Ejigbo/Ogbomoso Road. The police operatives were working on information from the Benin command.”