War: Ukraine Gets Another Boost From US Amid Conflict With Russia


The U.S. Defence Secretary Lloyd Austin said this on Thursday at a U.S. base in Ramstein, Germany. 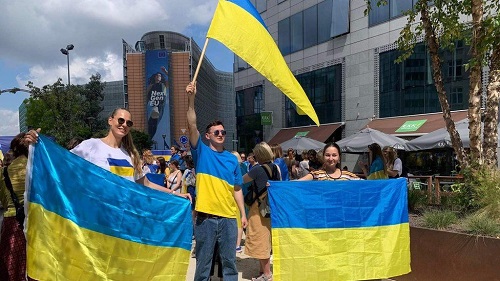 US has announced another $675 million in military aid to Ukraine.
This is to help the country in its war against Russia.
The U.S. Defence Secretary Lloyd Austin said this on Thursday at a U.S. base in Ramstein, Germany.
Austin had invited the members of the Ukraine Contact Group to a conference at the base, which was also attended by German Defence Minister Christine Lambrecht and NATO Secretary General Jens Stoltenberg, among others.
In his opening speech, Austin repeatedly emphasised that Ukraine needed support for a “long haul’’ and that the country had a tough road ahead.
“In our discussion today, we will also discuss the next steps in establishing an international training mission for the Ukrainian armed forces,” Austin said.
Austin thanked Lambrecht for the German pledge to strengthen Ukraine’s future air defences.
Recall that United States President Joe Biden, at the end of August, announced an aid package for Ukraine amounting to almost three billion dollars for advanced hardware, such as air defence systems and drones.
Russia invaded neighbouring Ukraine on February 24 this year, and several casualties have already been recorded as a result of the war.
In response, European countries, as well as the U.S., imposed unprecedented sanctions against Moscow and began supplying heavy arms to Kiev.
The fighting is now concentrated in the east and south.
Top Stories