Lawan arrived Minna around 1.30 pm and visited the residence of General Abdulsalam before he moved to Babangida’s. 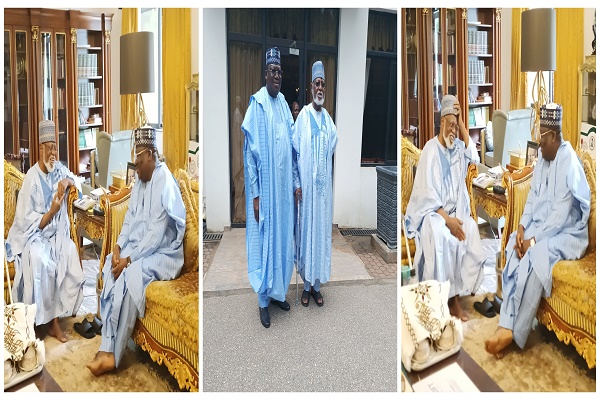 Lawan on Saturday had closed-door meetings with both men separately at their Uphill residences in Minna.

Lawan arrived Minna around 1.30 pm and visited the residence of General Abdulsalam before he moved to Babangida’s.

His meeting with Abdulsalam took about 40 minutes while the meeting with Babangida lasted for about 30 minutes.

Speaking to Journalists after he met with Abdulsalam, the Senate President said that the two leaders have a lot of roles to play in ensuring the unity and peaceful co-existence of Nigerians.

Lawan, who was accompanied by the Senator Sani Musa (Niger East), explained that he is in Minna on a sympathy visit to the former Head of State who is recuperating from a recent illness.

He added that as an elder statesman, the visits was necessary especially with Abdulsalam’s contributions to the country.

“As our leader and elder statesman, we felt that it is necessary that we make this visit today to come and sympathize with him and his family.

”We are grateful to God for the lives of our fathers and we pray that they recover completely so that they would be able to continue with their good work of ensuring that Nigeria remains united and Nigerians live peacefully amongst themselves”.

Lawan declined questions on politics and the 2023 elections, insisting he was on a private visit.