The suspect was apprehended by the NSCDC Special Female Squad after a tip-off by a Non-Governmental (NGO), Emerging Genderplus in Abuja. 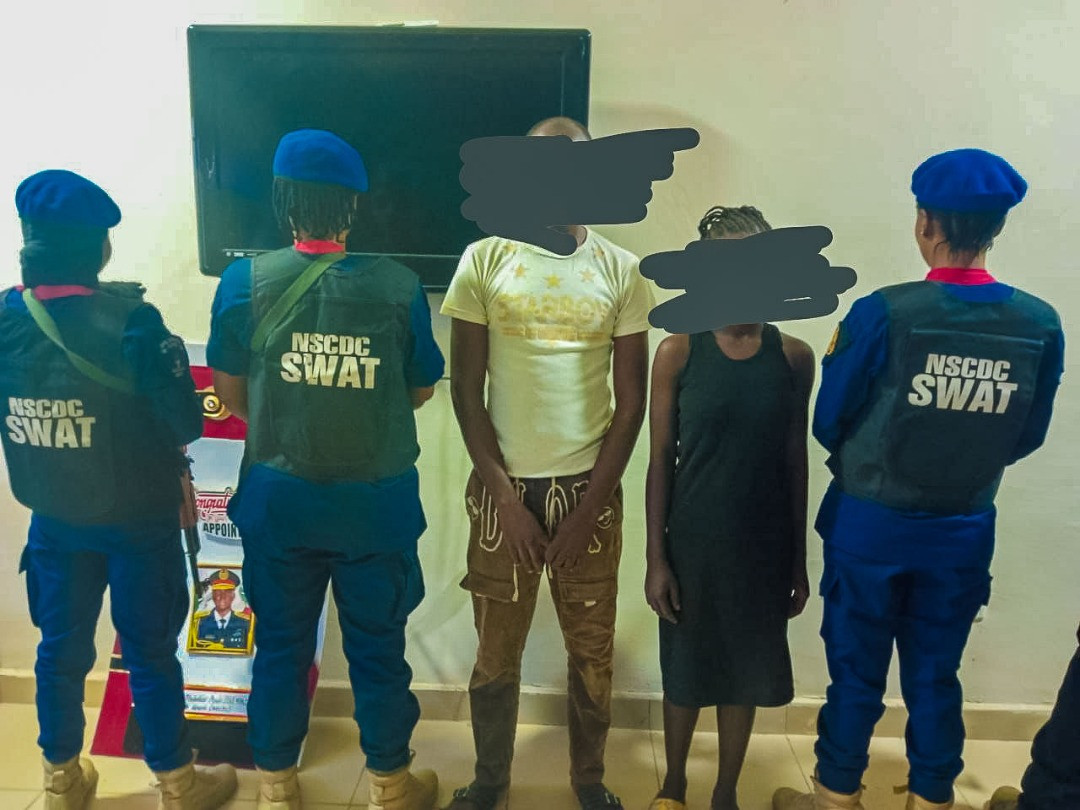 A man identified as Mr Tyoughche Emmanuel, has been arrested by the Nigeria Security and Civil Defence Corps (NSCDC).

He was arrested for allegedly defiling his 14 years-old niece in Anagada, a community in Abuja.

The suspect was apprehended by the NSCDC Special Female Squad after a tip-off by a Non-Governmental (NGO), Emerging Genderplus in Abuja.

The commandant in charge of Anti-human Trafficking, Irregular Migration and other Related Offences Unit, NSCDC National Headquarters, Abuja, Elor Janet, made this known while parading the suspect on Saturday, September 10.

Director, Public Relations, NSCDC, Mr Olusola Odumosu in a statement made available to newsmen in Abuja, said the Corps is concerned by the reoccurring cases of human trafficking, sexual harassment and female gender abuses in the country and has vowed to put an end to the menace by protecting the girl child.

"The suspected paedophile, aged 38 years who hails from Naka Gwe-West, Local Government Area of Benue, was arrested by the NSCDC Female Squad in Anagada at about 5:30 am Friday morning and handed over to human traffic unit, for his consistent sexual assault on his 14 years old niece, Angel (not her real name) who was under his custody," the statement read.

Narrating her ordeal in the hands of her uncle, the 14-year-old victim said the suspect gave her an unknown substance which made her to sleep off.

“My uncle Mr Tyoughche Emmanuel, gave me a black substance in a small bottle to drink after which I slept off and the next thing I noticed was my Uncle putting his fingers inside where I use for urinating. He did so four times on different occasions and also sucked my breasts during these occasions too and my breasts are paining me."

"Whenever his wife (of the accused) goes out, he will come around me and I always refuse, but he threatened me that he will beat me until I vomit blood, so I was afraid of telling anybody.”

The accused has confessed to the crime and pleaded for leniency, stating it was the work of the devil.

"I didn’t know what came over me, please, I know what I have done is very bad, please help me beg my brother to forgive me because this is a shameful act in the family." he said.

Meanwhile, the wife of the accused, Mrs Janet Tyoughche also accused her husband of not performing his responsibility of providing for the family and has continuously battered her.

Elor said the arrest was effected based on the Commandant General’s charge for the unit to redouble its efforts in ensuring that crimes relating to these ugly and dastardly acts are eradicated in the society.

She promised that there will be no hiding place for any criminal who perpetrate such act as rape, child molestation, human trafficking or any act violating dignity and integrity of women or girl child.

She said, "the commandant-general has compelled us not to rest on your oars but to go all out to nip in the bud these ugly menace.

"That is why we swung into action with the Special Female Squad to arrest the suspect and bring the shameless rapist to book.It will no longer going to be business as usual for these criminal elements, this ugly act must stop, the girl child must be protected."

She commended the Female Squad for their professional conduct and promptness in effecting the suspect’s arrest.

After conducting preliminary investigation, the suspect and the victims have since been handed over to NAPTIP for further medical examination, investigation and possible prosecution.

The NSCDC CG, Dr. Ahmed Audi had subsequently advised the general public to report such cases to the Corps or any security agency close to them for prompt response.

"if you see something always say something and rest assured that the Corps will come to your rescue because your safety is paramount to us."