The theme of the event organised by NLNG for the 2022 edition is: “Innovations in Sustainable Food Security”. 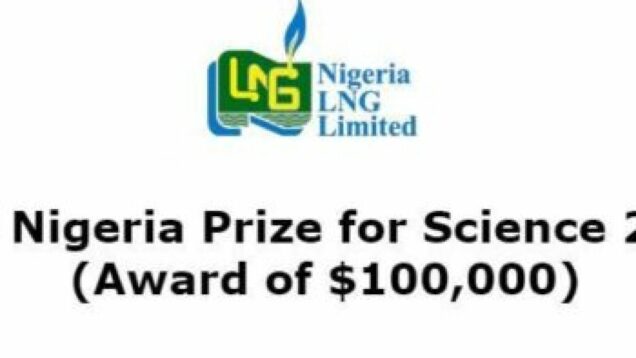 Two winners have won this year's Nigeria Liquefied Natural Gas Ltd. (NLNG) Nigeria Prize for Science award worth $100,000.
According to NAN, Prof. Barth Nnaji, a former Minister of Power and Chairperson of the Advisory Board for the prize made the announcement at a news conference in Lagos on Wednesday.
The theme of the event organised by NLNG for the 2022 edition is: “Innovations in Sustainable Food Security”.
The News Agency of Nigeria (NAN) reports that the panel of judges for the Nigeria Prize for Science received 107 entries from scientists worldwide for the 2022 edition.
A panel of judges led by Prof. Christian Agbo, from the Department of Agriculture, University of Nigeria Nsukka reached the decision on the winning entries.
Other members on the panel were Ms Funke Opeke, the Chief Executive Officer of MainOne and Prof. Mohammed Magaji, from the Department of Agronomy, Usman Danfodiyo University, Sokoto.
Nnaji said that one of the outstanding works was on:”Gains in Grain Yield of Released Maize (Zea Mays L.) Cultivars under Drought and Well-Watered Conditions” by Muhydideen Oyekunle and Shehu Ado.
He said that the second one was on: “Development of Process Plant for Plantain Flour” by Sesan Ayodeji and Emmanuel Olatomilola.
According to him, the two groups will split the 100,000 dollars grand prize.
On the judges’ report, the chairman said that the works addressed food security which was a key component of the national agenda.
He said that the works were in line with goal two of the Sustainable Development Goals which sought sustainable solutions to end hunger in all its forms by 2030 and to achieve food security.
Nnaji further said that the choice of the judges reflected a multi-disciplinary approach relevant to the theme in focus.
He said the advisory board was particularly pleased that in evaluating the entries, the judges upheld the objectives of the prize which sought to identify and promote excellence in utilising scientific knowledge.
“Muhyideen Oyekunle, a Maize Breeder and Prof. Shehu Ado, an Agricultural Expert’s work on: “Gains in Grain Yield of Released Maize (Zea Mays L.) Cultivars under Drought and Well Watered Conditions” provides us with a unique opportunity.
“The maize seeds they selected courtesy of a breeding programme has been tested to be high yielding and water stress tolerant.
” Prof. Sesan Ayodeji, from Federal University of Technology, Akure and his colleague, Mr Emmanuel Olatomilola’s work on “Development of Process Plant for Plantain Flour” is important for reducing spoilage of farm products and package for distribution as well as value addition for farm products,“ he said.
The advisory chairman commended the NLNG board and management for instituting, sponsoring and sustaining what was arguably the biggest science prize in Africa.
In his remarks, Mr Andy Odeh, NLNG’s General Manager, External Relations and Sustainable Development said that the science prize was growing in strength as the 2022 verdict depicted.
Odeh said that the advisory board and NLNG were working behind the scenes to review the prize for bigger impact and inclusiveness for the good of society.
He said that science could provide solutions to most of the country’s challenges and urged relevant stakeholders and the public to continue to support NLNG through the Nigeria Prize for Science.
He noted that stakeholders could do this by making scientific breakthroughs the biggest enabler of development in Nigeria, adding that industry and public investors should consider the commercial value of the winning works.
The general manager commended the winners for the big feat and called on all past winners of the prize to synergise and become a think-tank that could generate and sustain the flow of ideas, innovation and scientific advice to the public and private sectors.
He further said that this would make scientific ideas and innovations beneficial to the people, thereby helping to build a better Nigeria in line with the vision of the organisation.
Odeh added that the winning works had the potential to significantly impact the country’s food security positively through stable, efficient and sufficient system of food production.
Top Stories