The poll which was conducted this month points to a three-horse presidential race between Obi, Bola Tinubu of the All Progressives Congress and Atiku Abubakar of the Peoples Democratic Party. 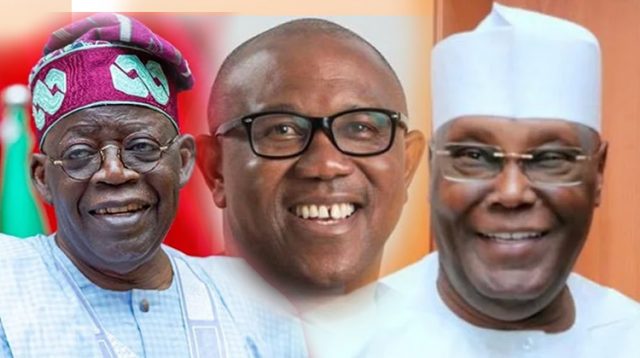 Peter Obi of Labour Party has won a poll conducted by NOI Polls and commissioned by ANAP Foundation asking Nigerians to choose the candidaate they will vote for as President in 2023.
According to a report by Punch, the poll which was conducted this month points to a three-horse presidential race between Obi, Bola Tinubu of the All Progressives Congress and Atiku Abubakar of the Peoples Democratic Party.
They, however, described Rabiu Kwankwaso of the New Nigeria People’s Party who came fourth in the poll as a ‘dark horse’.
“The results showed a significant lead for Mr Peter Obi with 21% of voters proposing to vote for him if the presidential election were to be conducted today; and 13% each proposing to vote for Asiwaju Bola Ahmed Tinubu and Alhaji Atiku Abubakar who are both tied in second place. Dr Rabiu Kwankwaso was a distant fourth with 3% of voters proposing to vote for him,” a statement by ANAP foundation announcing the result of the poll shows.
The statement added that Obi’s 8 percentage point lead at this early stage is significant, but not sufficient to separate him  completely from a leading pack of candidates scoring 21%, 13% and 13%  respectively.
It says that undecided voters and those who prefer not to reveal their preferred candidate add up to a whopping 32% and 15% respectively, adding that the gender split of undecided voters shows that 39% of women are undecided versus 27% of male voters.
The percentage of registered voters according to ANAP foundation is as follows in each of the zones – 99% in the North East, 90% in the South South, the North Central and the North West respectively. The lowest registered voter percentages were in the South East with 88% and the South West with 85%.
Nigeria’s presidential elections will hold  in February 2023 with campaigns set to start at the end of September.
Top Stories