The man with only a wrapper around his waist could be heard defending his action, arguing that his wife deprived him of a lot of things. 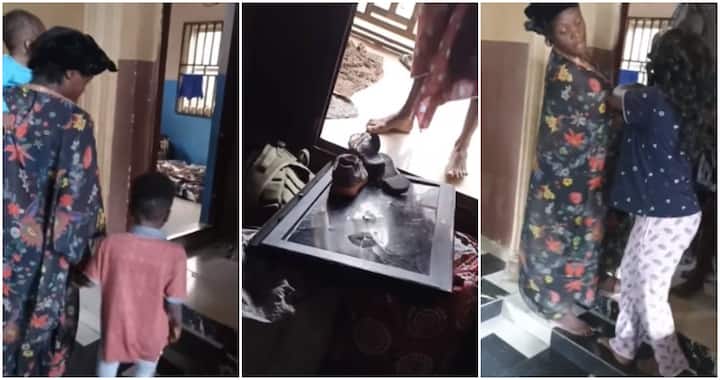 A man has been thrown out by his wife after she caught him cheating with another woman in their home.
A video of the incident has since gone viral.
In the video, the woman could be seen visibly angry as she attacked the husband and the woman he was cheating with.
The angry woman slammed the man for engaging in an extramarital affair under a roof she pays rent for with her money, but the man insisted that he's the head of the house and can do whatever he wanted.
The woman who couldn't take it, smashed the television and threw the man's things outside.
Watch video below:

Emmanuel Efemena said:
"But really, how can you have a lady strong enough to provide and hold a home together and be looking outside. The lady was too calm and just wanted him out. I don't know their about the build to this but what I do know is if you have a queen then you're really blessed."
Tony Okey said:
"Some of us don't get it the man was shouting how the woman was depriving him a lot of things and that was what prompted him to behave the way he did but he was wrong for bringing the girl in side their matrimonial home south south people Sabi do this kind things."
Frankonero Proso said:
"Madam thanks very much for your actions you did very well i have my reasons for appreciating your actions but am not going to mention them.
"The lord almighty will strengthen you and your lovely kids."
Juliet Love said:
"I love this woman, is better to be a single mother that is taking care of everything than to be in marriage and working like the man, and yet the man will not still respect you."
Imoleayo Maforikan said:
"This is not good for the children's mental state . They should have just ask to take the kids out of the environment first."
Top Stories