The social media pages of the former governor of Lagos State were bombarded with mixed reactions from a cross-section of Nigerians. 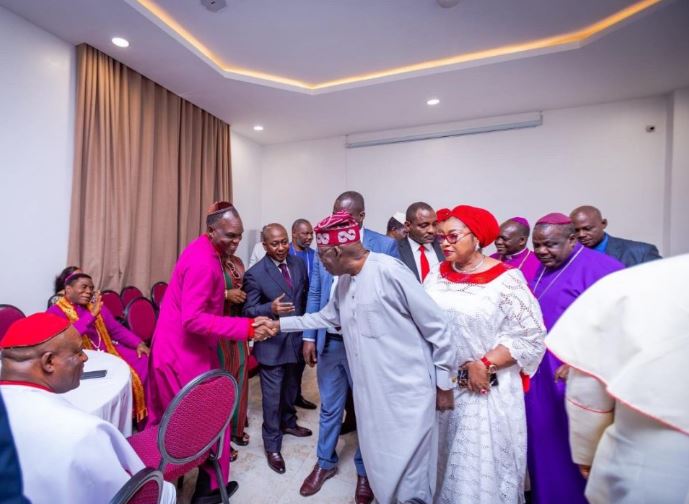 Presidential Candidate of All Progressives Congress, Asiwaju Bola Tinubu met with some Bishops on Thursday night.

However, the closed-door meeting between Tinubu and the Pentecostal Bishops Forum of Northern Nigeria in Abuja has come under scrutiny.

The social media pages of the former governor of Lagos State were bombarded with mixed reactions from a cross-section of Nigerians, especially on Facebook and Twitter, hours after exclusive photographs of his rendezvous with the northern clerics in his Abuja campaign office hit the internet.

The development is coming barely three months after the Christian Association of Nigeria dissociated itself from the presence of some alleged bishops and pastors at the unveiling of the vice presidential candidate of the party, Kashim Shettima, saying they were desperados who went there for themselves.

CAN stated that although Tinubu was free to “hire mechanics and other artisans and sew clerical garments for them”, the effort would only add to their many ropes but would not change the need for fairness and justice.

Similarly, on Tuesday, former Speaker of the House of Representatives, Yakubu Dogara, and former Secretary to the Government of the Federation, Babachir Lawal, made renewed threats to mobilise northern Christian electorate to vote against Tinubu in the February 25, 2023 poll.

Dogara had predicted that adopting a Muslim-Muslim ticket was a fruitless political effort that was “doomed to end in spectacular failure.”

The ex-speaker made the statement while delivering his keynote address at a summit tagged ‘Meet The Church,’ organised by the Nigeria National Christian Coalition.

Lawal, on the other hand, vowed that the introduction of a same-faith ticket by the APC was a deliberate plan to further create divisions in the north.

The disgruntled former SGF, who spoke during an interview on Arise Television, declared that he was working with about 40 Christian leaders in the north to ensure that the contentious APC ticket failed.

But in Thursday’s meeting, the APC national leader reportedly explained to the PBFNS delegation led by Archbishop John Praise of Dominion Chapel International Church his reason for selecting Shettima to the northern Christian bishops.

Tinubu stated that his selection of Shettima was not a deliberate attempt to spite the Christian community but a choice he had to make to give Nigerians good governance if he got elected.

He stated, “Earlier today at a lively, productive and amiable meeting with a delegation representing the Pentecostal Bishops Forum of Northern Nigeria, we discussed important issues of national significance as well as my determination to deliver unity, harmony and lasting peace to Nigeria.”

The reactions to his social media posts were instantaneous. While some of his followers and party supporters hailed his action, critics trolled and lampooned him for attempting to pull another stunt on the Christian community.

On Facebook, an engineering graduate of the Enugu State University of Science and Technology, Ebenezer Arinze, pondered when the former governor had suddenly come to a desperate realisation that he needed to work with Christian leaders after settling for a Muslim-Muslim ticket.

“Northern Christian leaders? How did they become so noticeable to a person who feels that the more than 50 per cent of the Nigerian population that is Christian can’t produce a worthy running mate?” he quipped.

But Founder of IntegerPlus TV, Jide Shopekan, hailed the move saying, “Las Las it’s all about interest. The best political strategist in the ring.”

On his Twitter page, an estate agent, Agaba Idu, warned that Tinubu’s continued romance with phoney preachers wouldn’t be seen as an endorsement by aggrieved Nigerians.

He said, “Tinubu leave fake Bishops. You won’t make any impact with this deceit. It’s a failed project.”

@PrinceLince stated, “You saw them but went and hired some fake Charlatans to attend the unveiling of your Boko Haram VP.

“Well, unfortunately for you, these people can never preach Muslim-Muslim ticket to their Congregation.”

But a software developer, Olowojaye Rufus, defended Tinubu’s position saying, “Being married to a pastor with Christian children, he is, to an average Muslim northerner, not a Muslim.

“If he picked a Christian running mate, that’d be an own goal — Atiku will milk it to destabilise him in APC’s strongholds in the North. Shettima was his safest choice.”

Another tweep, Daniel Onuoha, accused the APC candidate of religious bigotry through his choice of same-faith ticket.

He stated “Fake bishops… You said Christians are not competent. Why do you need our incompetent votes?

“Muslim Muslim ticket is an insult to our faith… you should be ashamed of that choice but you even had the guts to enter a church…so shameless.”