The building, which is at the roofing stage collapsed, at the weekend while the deceased, all carpenters, were dismantling the parapet boards. 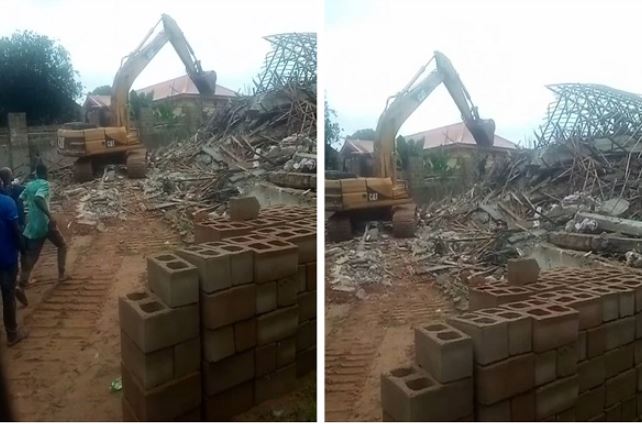 Two others escaped death in the tragic incident.

The building, which is at the roofing stage collapsed, at the weekend while the deceased, all carpenters, were dismantling the parapet boards.

Narrating his lucky escape to The Nation, a survivor, Mr. Ositadinma Chukwuleta, stated he jumped from the building as soon as he noticed a crack in the structure’s foundation.

He said: “While loosing the woods used to cast the parapet, I noticed the building cracking from the foundation and I jumped down immediately escaping the collapse.

“The other two working inside the building were, however not so lucky.”

The visibly shocked Chukwuleta, who could not hold his emotions, ,said he had since been abandoned after the incident, saying his condition could have deteriorated if not for sympathizers who had been assisting to stabilise him with drugs and support.

A member of the Nigeria Red Cross Society, Mr. Vincent Okonkwo said the remains of the deceased had been deposited at the morgue after being evacuated from the debris.

He assured that government would get to the root cause of the collapse, while appropriate sanctions would be meted out to culprits.

He advised developers to always get approvals from appropriate authorities as well as engage services of professionals before embarking on any construction.

A team from Council For Regulation Of Engineering In Nigeria (COREN), led by its state Chairman, Engr. Victor Meju confirmed the building did not comply with building codes and guidelines while no Engineer was found on site.

It assured that proper investigation would be initiated and culprits, including those who claim to be engineers that handled the project would be brought to book.