One of the brothers who caught the assault on the video claimed that the policemen threatened to kill his brother over vehicle papers. 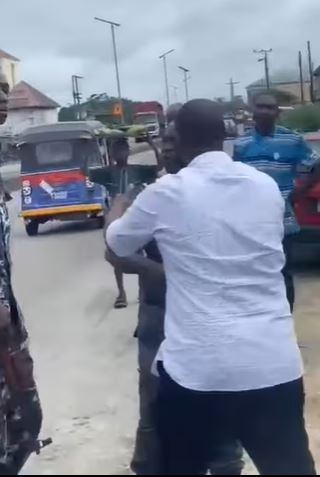 A group of police officers have been caught on camera assaulting two brothers in Bayelsa State.
According to one of the brothers, the policemen threatened to kill his brother over vehicle papers.
In the video, one of the brothers tackled the policeman, who physically assaulted him, while another policeman warned the other one to stop recording the scene.
The man recording the video said, “This is Nigeria police, threatening to kill my brother because of particulars and driver licence, calling us thieves.”
Meanwhile, the Force spokesperson, Muyiwa Adejobi, said that the policemen will be fished out. He said this on his Twitter handle on Monday.
“We are looking into it. Bayelsa command will fish them out. #BayelsaPoliceNG, ensure necessary action and revert pls. Thanks."