The officers were said to have demanded N610,000 from her for investigation and tracking, adding that she paid the money. 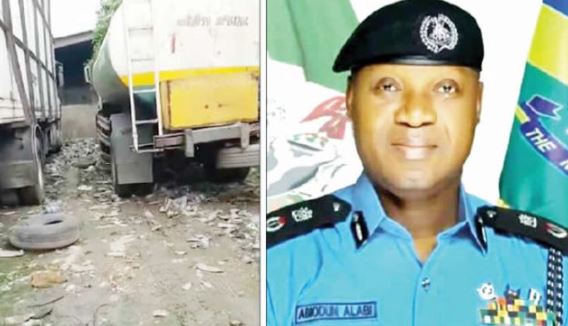 Olabisi Ayinla, a 45-year-old widow, has made some startling allegations against the Lagos police.

She accused men of the State Criminal Investigation Department, Yaba, Lagos State, of extorting N610,000 from her.

PUNCH Metro gathered that on August 27, Ayinla hired a truck to convey 15,000 litres of diesel, worth over N10m, to one of her customers at Idera Bus Stop, Owode Onirin in the Ikorodu area of the state.

However, the truck was allegedly hijacked by some armed men in military uniform at Anthony Bus Stop, along the Lagos-Ikorodu Expressway.

The widow, who supplies diesel and petrol products, told our correspondent on Thursday that the case was immediately reported at the Anthony Police Station, but was transferred to the SCID.

The officers were said to have demanded N610,000 from her for investigation and tracking, adding that she paid the money.

However, Ayinla said the cops had refused to do anything about the case, adding that they were making more demands from her.

She said, “The truck was hijacked by some unknown military officers who ordered the driver to get down on the allegation that he was transporting diesel mixed with kerosene.

“The driver showed them the waybill of the product, but the officers ordered him to get down and not switch off the engine of the truck. They also seized the waybill.

“The vehicle was later found on that same day around 7am at the LASTMA office, Iponri, through independent tracking of the motor boy’s phone, which was in the truck.

“I found out that the product had already been discharged from the vehicle when I got to the LASTMA office.”

She noted that the truck driver and motor boy, however, recognised one of the LASTMA officials, identified simply as Kabiru, as the driver of the Sienna vehicle that conveyed them to Seven-Up Bus Stop.

Ayinla stated that the duo were, however, detained at the SCID.

“A female police officer, Blessing, and one Supol Malik asked them to shut up when they identified Kabiru. Till now, they have done nothing regarding the matter except demanding more money,” she added.

Our correspondent sighted a petition written by a rights organisation, the iRelief Committee for Human Rights and Civic Engagements, regarding Ayinla’s complaints.

The petition, which was signed by the Committee National Chairman, Momoh Raimi, and addressed to the Inspector-General of Police, Usman Baba, dated September 28, 2022, demanded an investigation into the ‘professional misconducts’ of the policemen.

The state Police Public Relations Officer, Benjamin Hundeyin, said he was not aware of the incident.

The LASTMA spokesperson, Taofik Adebayo, stated that neither the agency nor its officials were involved in the matter.

He said, “On that Saturday morning, a mini tanker was discovered to have been abandoned along Bode Thomas Road, off Funsho Williams, with plate number GGE558SJ. Upon discovery around 7am, we noticed that all the doors were left open, so we quickly drew the attention of the Iponri Police Station.

“The content of the truck had been emptied when we found it. The confessional statement of the driver was that the vehicle was hijacked. No LASTMA official was involved; the only persons involved were the towing vehicle personnel and the driver.”