The group said its leader, Mazi Nnamdi Kanu and leadership never promised to pay N10 million to anyone to kill on their behalf. 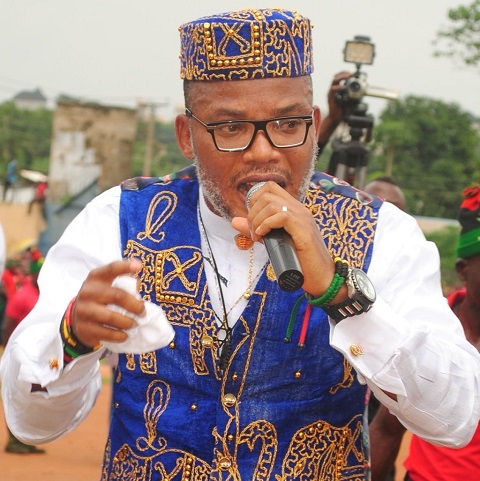 The Indigenous People of Biafra (IPOB) has denied reports that its leader, Nnamdi Kanu promised people terrorizing residents of the South East rewards.
This is as the group disassociated itself from ongoing kidnappings and criminalities in some parts of Anambra and Imo States.
The group said its leader, Mazi Nnamdi Kanu and leadership never promised to pay N10 million to anyone to kill on their behalf.
In a statement by its Media and Publicity Secretary Emma Powerful IPOB alleged that those behind the killings were government sponsored to blackmail its leader and Biafra movement.
It also alleged that most of the attack on army officers in Anambra State were carried out by security forces to demonise its Security outfit, Eastern Security Network (ESN).
The statement partly reads: “We wish to disassociate ourselves from the numerous kidnappings and criminalities going on in some areas of Anambra and Imo States.
“The criminalities going on within Uli, Lilu, Ihiala, Nnewi, Orsuihiteukwa, Orsu areas of Imo State and Anambra are not in any way connected to IPOB members or Leadership and we condemn it in its entirety.
“In a desperate efforts to blackmail IPOB, the criminals have been mentioning IPOB or ESN to their victims during their operations so that their victims will believe that they are IPOB members.
“One begins to wonder how a thief will rob and give his victim his house address. This is exactly what the Government sponsored criminal blackmailers are doing with the name of IPOB.
“IPOB members and volunteers are disciplined and our goal is to free our people not to trouble or destroy them. IPOB will not be troubling our people and at the same time paying the ultimate price in ensuring our people are free from oppression.
“Therefore, we ask everyone to work together and stop these criminals and hoodlums who were sponsored by the unfortunate politicians to terrorize our people.
“IPOB does not engage in taxing those building houses or those conducting burials. IPOB cannot indulge in collecting millions in levies to allow people to build their own houses or bury their loved ones in Biafra Land. We want our people to report those criminals taxing them by contacting IPOB inquiry lines for proper handling by ESN.
“Again, IPOB has no camp in Orsuihiteukwa, Orsumohu, Nnewi South, Lilu, or in Ihiala. Those operating in such camps in the aforementioned areas are criminals and kidnappers.
“These criminals are not IPOB members or ESN operatives and we are making it very clear that Mazi Nnamdi Kanu and IPOB leadership never promised to pay anyone N10 million for killing any body on our behalf. Our leader Mazi Nnamdi KANU and IPOB leadership (DOS) has always condemned those engaging in criminalities in Biafra Land.
“Most of the attack to army officers along the road in Anambra State were done by fellow Nigeria army with the hope of demonising ESN and IPOB volunteers which they have failed.
“Our Leader MNK and DOS are passionate for the freedom of Biafra Nation and has never and will never make any promise to anyone to kill for a reward in the name of IPOB.
“Those committing these crimes and making such outrageous claims are Government sponsored criminals working to blackmail Mazi Nnamdi KANU and the Biafra movement.”
Top Stories