Higuain started out in the River Plate Youth academy before joining Real Madrid in the 2006-07 winter transfer window. 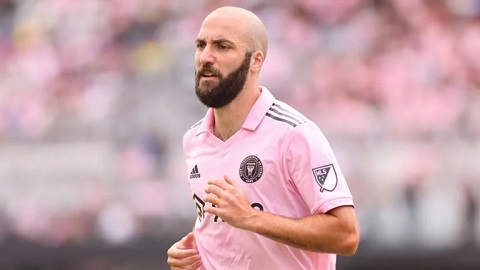 Gonzalo Higuain has retired from football at the age of 34.
The former Real Madrid striker announced his retirement at a press conference.
“The day has come to say goodbye to soccer, a profession that has given me so much and I feel privileged to have experienced it with its good and not so good moments,” he said at the press conference.
Higuain started out in the River Plate Youth academy before joining Real Madrid in the 2006-07 winter transfer window.
At Real, he won three LaLiga titles, a Copa del Rey and two Spanish Super Cups under his belt.
He then moved to Napoli where he increased his goalscoring figures to 36 goals in 35 games in 2015-16 and top scorer in Serie A.
The Argentine, however, slammed people who take to social media to pass off unsavoury comments, noting how he suffered from it.
“There’s kind of a toxic feeling around football on social media. You can’t imagine the damage that comments on social networks do,” the Argentine said as quoted by football expert, Fabrizio Romano.
“I was really suffering, my family helped me. So, people should think before attacking others on social media – it’s a really serious topic.”
Higuain, in his career, faced lots of criticisms across spells at Real Madrid, Juventus, Chelsea, and with the Argentine national team.
Top Stories