Father And Son Rearraigned For Alleged N5.6bn Fraud In Lagos


They were re-arraigned on 14-count amended information bordering on money laundering. 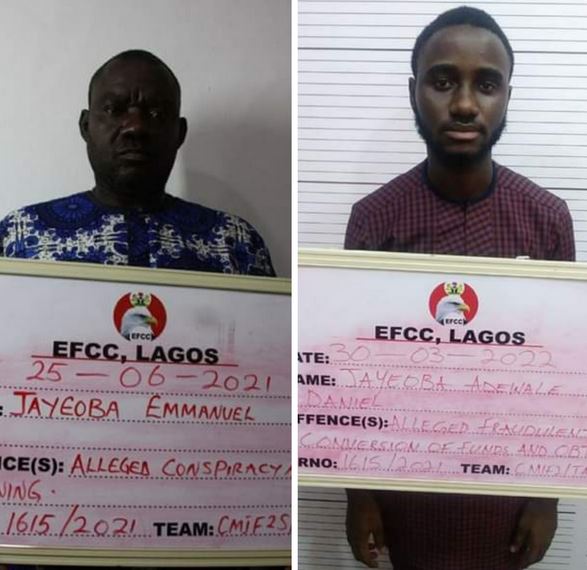 A father and son duo, Emmanuel Adewunmi Jayeoba and Adewale Daniel Jayeoba have been rearraigned before Justice Chukwujekwu Aneke of the Federal High Court sitting in Ikoyi, Lagos by the Lagos Zonal Command of the Economic and Financial Crimes Commission (EFCC).

EFCC's spokesperson, Wilson Uwujaren, who disclosed this in a statement on Wednesday, October 12, said the defendants were re-arraigned on a 14-count amended information bordering on money laundering to the tune of N5, 697, 029, 685 ( Five Billion, Six Hundred and Ninety –seven Million, Twenty-Nine Thousand, Six Hundred and Eighty- Five Naira)

One of the counts reads: “ That you, Adewale Daniel Jayeoba and Emmanuel Adewunmi Jayeoba, between 2019 and 2020, in Lagos, within the jurisdiction of this Honorable Court, conspired amongst yourselves to use the aggregate sum of N5.697,029,685 (Five Billion, Six Hundred and Ninety seven Million, Twenty nine Thousand, Six Hundred and Eighty five Naira), which sum you reasonably ought to have known forms part of your unlawful activity to wit: carrying on banking business without valid license and you thereby committed an offence contrary to Section 18 (a) of the Money Laundering (Prohibition) (Amendment) Act, 2012 and punishable under Section 15(3) of the same Act.”"

They pleaded “not guilty “to the offence.

In view of their pleas, the prosecution counsel, Chinenye Okezie, asked the court for a trial date and also prayed that the defendants be remanded in prison custody.

In response, counsel to the defendants, I.A. Raji, informed the court that the defendants had previously been granted bail by Justice Nicholas Oweibo.

He, however, told the court that the defendants had not been able to perfect the bail conditions.

The defence counsel, therefore, prayed the court for a short date for the hearing of the bail variation.

Justice Aneke adjourned the matter to October 17, 2022 and December 6, 2022 for hearing of the bail application and trial respectively.

The Judge also ordered the defendants to be remanded in prison custody.