Aubameyang left the Emirates stadium for Barcelona in controversial circumstances after a fall-out with Arteta over disciplinary issues. 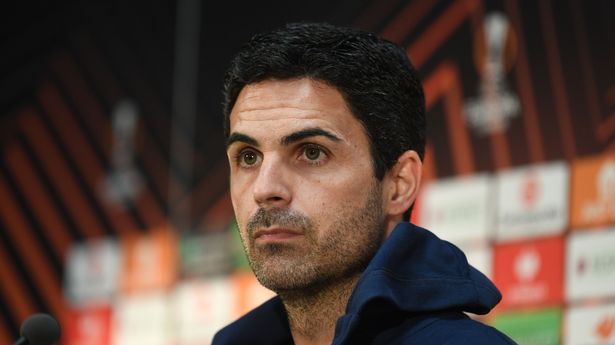 Arsenal manager Mikel Arteta has replied after he was tackled by former captain Pierre Emerick Aubameyang.
Aubameyang had accused Arteta of lacking the ability to manage big players.
Reacting, Arteta said the current Arsenal’s dressing room is the best he has been in.
The Spanish manager insisted that his current squad is more hardworking than in previous years.
Aubameyang left the Emirates stadium for Barcelona in controversial circumstances after a fall-out with Arteta over disciplinary issues.
He, however, returned to England after a six months stint at the Camp Nou, signing for Chelsea.
A video emerged recently of the Gabonese International slamming Arteta over his management skills.
“To manage big characters or big players, he (Arteta) can’t deal with it. He (Arteta) needs some young players, they don’t say anything, they listen,” Aubameyang was recorded as saying in an interview with A Jewellers.
Arteta was asked about Aubameyang’s comments on the eve of Arsenal’s Europa League clash with Bodo/Glimt.
‘People are free to discuss what they want,’ he told reporters in Norway.
‘I have never been in a better dressing room (than this season) – more enjoyable, more hard-working, a better relationship between staff and players and it is an absolute pleasure as a coach to be a part of this group.’
The Gunners sit top of the Premier League table after beating Liverpool 3-2 on Sunday, with Bukayo Saka grabbing a brace.
In the Europa League, they also sit on top of their group table, and will face Bodo/Glimt on Thursday in Matchday 4 of the Europa League.
Top Stories