The project was awarded by the Federal Ministry of Water Resources in 2020 and is situated in the Senate President, Ahmed Lawan’s senatorial district in Yobe North. 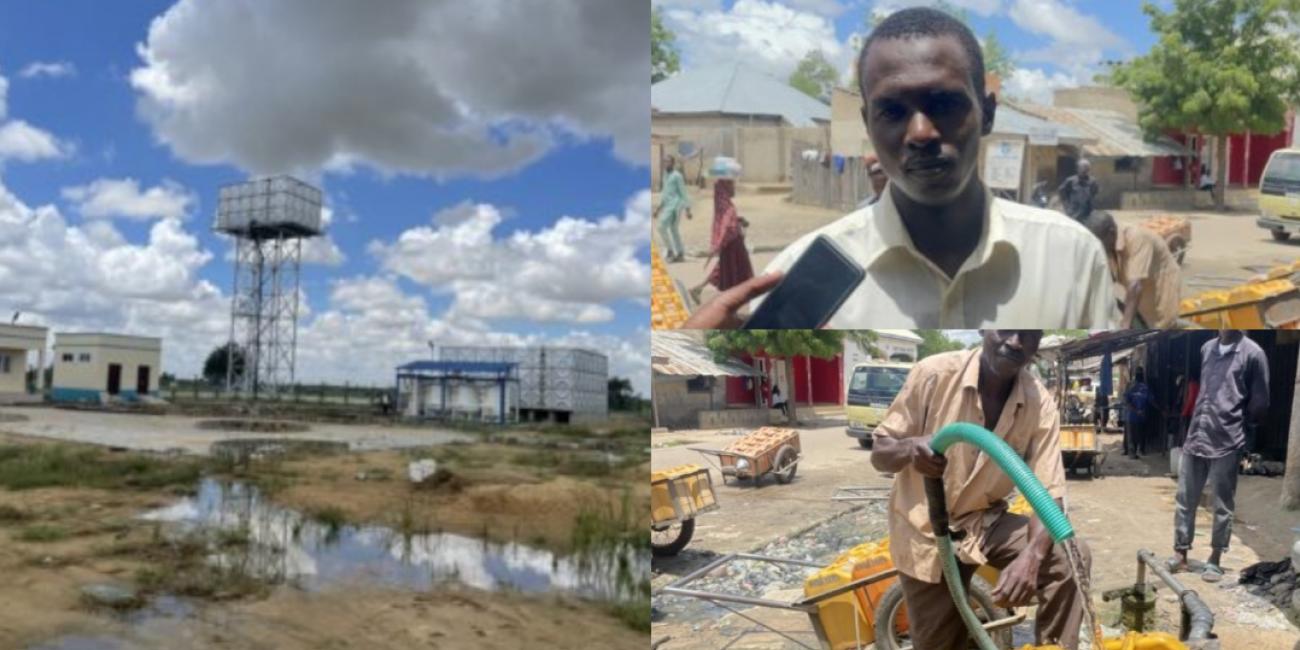 According to a report by SaharaReporters, the execution of water schemes project worth over N490million in Gashua, Bade Local Government Area of Yobe State, has been fraught with corruption.

It has therefore been abandoned as the residents continue to suffer the harrowing effects.

According to investigations, the project was awarded by the Federal Ministry of Water Resources in 2020 and is situated in the Senate President, Ahmed Lawan’s senatorial district in Yobe North.

In 2020, the Federal government through its COVID-19 emergency fund claimed to have executed a total of 14 different projects through the Ministry of Water Resources, amounting to N2.6 billion. One of such projects is the GASHUA TOWN WATER SUPPLY PROJECT.

Gashua is a political ward in Bade LGA of Yobe State – the hometown of Senator Ahmed Lawan, the Senate President of the 9th Assembly.

Records from Nocopo, a public procurement website developed by the federal government which captures all procurement expenses including the Covid-19 Emergency Fund, revealed that in 2020, the Federal Ministry of Water Resources awarded to Yubar Consultants Ltd, the contract for the construction of the Gashua Water Supply project.

The project was designed to be completed in 120 days. But two years later, the project remains abandoned with grasses taking over the site.

Solacebase discovered that the water supply project was awarded at a total cost of N492,634,237 with full payment made in a single tranche- a procurement infraction permitted due to the urgency of the intervention.

The multimillion-naira Gashua water supply project is supposed to ameliorate the water scarcity the community faces and provide them access to potable water as part of their dividends of democracy through federal government intervention.

But Solacebace investigation revealed that there is no single functional borehole around Gashua community. It was also discovered that the Federal Ministry of Water Resources has awarded several borehole construction projects in Gashua community to the same company that got the one being investigated - Yubar Consultant Ltd.

Yubar Consultancy Ltd, located at number 5, GRA Road, opposite Government House, Gombe, Gombe State, according to findings is a family company belonging to Umar Barambu, a former APC member representing Akko Federal Constituency in the House of Representatives. Barambu lost his re-election bid in 2015 and defected to the Peoples’ Democratic Party (PDP), where he’s now running for the same seat.

The Directors of the company all bear the family name of Barambu, and they include Usman, Sanusi, Nafiu, Alamin, Abubakar, and Yahaya.

Despite full payment made to the contractor, an investigative visit to the project site accompanied by some community members revealed that the site had been overtaken by weeds and cobwebs.

A clear view shows a stand-alone structure with the machines already supplied and laid upon one another. The facility was fenced with barbwire to restrict access.

There was no evidence of an ongoing project. Pipes to channel water from the water plant to residents in Gashua town were not supplied or installed.

Residents said the site has been locked since the beginning of this year without any work going on.

Why would such a multimillion naira community project be abandoned for years without anyone saying anything? This is the question put forward to residents of the community.

On Monday, September 19th, the sun was fierce and scorching in Gashua, a nascent community in Bade LGA, Yobe North Senatorial District.

On different streets of the town, it is common to see young men of different age groups pushing trucks of jerry-cans of water for sale to residents desperate for portable water.

Yet, boreholes litter the community. But they were not supplying water to the community. From Katuzu to Kuratandu, Filling Tanda to Bayan Prison, and Takari Zarigo wards, the reporter counted 8 boreholes with their signboards indicating they were added by the ministry of water resources supervised by Senator Ahmed Lawal and constructed by Yubar Consultancy Ltd. “

Also, over 19 hand pump boreholes were counted and all were non-functional, leaving residents to rely on privately owned boreholes dug for commercial purposes by some residents.

This is the sad reality of the people of Gashua community, a community with over one million residents.

Muhammed Ibrahim, in Katuzu ward, is a manager in one of the privately owned boreholes where water vendors go to buy water and sell, this borehole is owned by Mal. Danladi Koli.

Mohammed’s 7 years of experience in the water business further exposed how the people of Gashua have always been deprived of potable water despite several water projects awarded to the community through Zonal Intervention Projects.

“In Gashua here, it is difficult to find a functional borehole or hand pump where the people can fetch water for free, all the boreholes constructed, even the newly constructed ones, have never brought out water even for one second, you can see it over there,” Ibrahim said.

“We sell 25-liter jerrycans at N20, but these water paddlers for their own profit, sell at N50, this is the reality of Gashua I must confess,” he added.

Bala Abubakar combines selling water and farming as his sources of livelihood, he only farms during the rainy season. Throughout the remaining seasons of the year, he sells water to feed his family from the proceeds.

“This is what I do year in and year out for over 9 years now, it might be stressful but it’s a win-win for us all, since there are no functional boreholes in Gashua, everybody resorts to buying, so I took it up as a business to paddle water to people’s doorstep,” Abubakar said.

Danjuma Mohammed, the ward development committee chairman of Gashua ward, and staff of Bade LGA, said there are many non-functional boreholes in Gashua community and across Bade LGA in general.

“Gashua is the headquarters of non-functional and deplorable solar powered or hand pump boreholes in the whole of North-East, we have so many of these boreholes with just debris on the site, some of these boreholes did not even work up to a month before they went bad, so it is difficult for us to fix what we have not enjoyed,” Mohammed lament.

“The so-called water supply project they started in 2020, precisely in August, has been abandoned, if they can fix all the non-functional boreholes by using quality materials, I don’t think we need any water supply project again, such money can be channeled into building good classrooms with fans for our children,” he added.

Solacebace reached out to the contractor to confirm the status of the project despite receiving over N496 million, but he offered no valid response.

Abubakar Barambu, one of the directors of Yubar Consultants Ltd, when contacted, requested for time before responding to the reporter. When he was contacted again a week after, he declined to respond and referred the journalist to the ministry.

But when Solacebace contacted the ministry to request details about the project, the ministry requested time to investigate it. The ministry was given two weeks but it never provided any information.

Meanwhile, the N400 million projects have been left to decay in Gashua, Bade LGA due to failure by the contractor to complete it despite full payment.