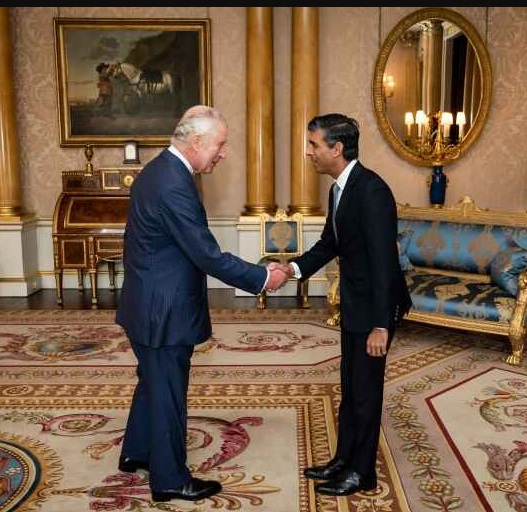 Rishi Sunak has officially become the Prime Minister of the United Kingdom.
This happened after he met with King Charles III on Tuesday morning.
He met with the King in the palace’s 1844 room, where the King  invited him to form a government.
Sunak had arrived the Palace around 10:15am to meet the King, shortly after Liz Truss tendered her resignation letter to the King in the same Palace.
Sunak will be UK’s third leader in seven weeks after winning a Tory leadership contest triggered by Truss stepping down
After being selected by Tory MPs on Monday, Sunak warned the country faced a “profound economic challenge”
He ruled out an early general election, despite calls from Labour, the Scottish National Party, the Liberal Democrats and the Green Party.
The new prime minister will make his own statement around 11:35 as he arrives at No 10 Downing Street.
Sunak is the first person of colour, the first British-Asian and the first Hindu to lead the United Kingdom.
He enters Downing Street at a moment of crisis for his party and the country, after Liz Truss’s shambolic 50-day tenure plunged Britain into even deeper economic turmoil.
Top Stories