2023: Udom May Resign As Atiku’s PCC Chair Over Lack Of Funds


According to the source, despite the PDP ruling Akwa Ibom State, Atiku is not the favourite presidential candidate in the state. 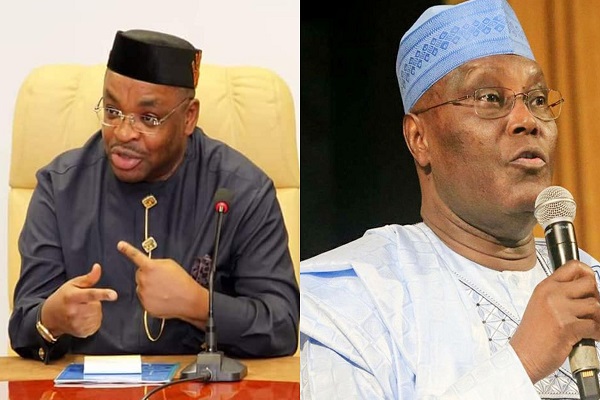 There are reports that Akwa Ibom State Governor, Emmanuel Udom may pull out of Atiku Abubakar’s presidential campaign council (PCC).
Daily Sun reported that the threat comes following refusal to release campaign funds .
The Commissioner for Information and Strategy in the state, Ini Ememobong, however, said he is not aware of Udom’s threat against the presidential campaign council of the Peoples Democratic Party (PDP).
According to Ememobong, Governor Udom does not issue threats, but discusses them, adding that he is a natural peace builder.
Ememobong said, “The Governor is a gentleman and doesn’t issue threats, he discusses. He is a natural peace builder wherever he finds himself, so we know he is pursuing peace and reconciliation to help the party win.”
A state government house source that spoke with Daily Sun, despite Ememobong’s stand claimed that Udom confided in some aides that he is annoyed with the inability of PDP presidential candidate, Atiku to release funds for the campaign in the state.
According to the source, despite the PDP ruling Akwa Ibom State, Atiku is not the favourite presidential candidate in the state.
The source further stated that this is why the campaign for the PDP presidential candidate should commence in earnest.
The source said, “At the moment, our governor has said he would not be spending a dime of the state’s funds on the presidential campaign because we don’t even have more than enough resources for our national and state Assemblies campaigns.
“He has even said he would rather resign than appear incompetent. He wants to campaign for Atiku but his hands are tied because of a lack of funds.
“At the moment, we are waiting for the candidate to release funds so that the party can start campaigning for him here but if he doesn’t do so, then we would just focus on our National Assembly and state candidates. It is not that the governor does not support him but the fact remains that we are our governorship campaign is our priority at the moment.”
The source noted that most of the billboards in Uyo are either for the PDP national assembly and state candidates or presidential candidates of other parties.
The source added that the supporters of the presidential candidate of the Labour Party, Peter Obi are sponsoring billboards and pasting posters of him all over the city but that of Atiku are few because funds haven’t been released.
Top Stories