The All Progressives Congress (APC) vice presidential candidate, Kashim Shettima was in the state to represent Bola Tinubu. 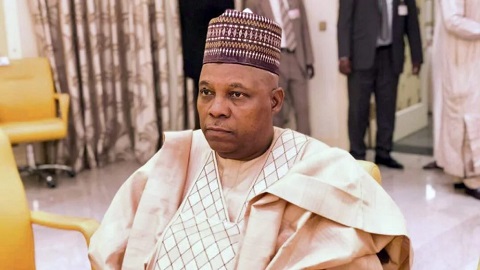 A town hall meeting by the All Progressives Congress (APC) has ended in chaos after Imo state participants of the party reportedly walked out.

It was gathered that the incident left vice presidential candidate, Kashim Shettima dumbfounded.

The cause of the walk-out has not been ascertained as at the time of this report.

While the event was still ongoing, some of the stakeholders present at the meeting staged a walkout, resulting in a rowdy session.

The video generated mixed reactions from some Nigerians, while some applauded the stakeholder’s action others pointed at the facial expression of Shettima over the incident.
miz_kayz_hair wrote: “Did I hear close the gate? Na by force to stay back”
francessfine wrote: “I can’t be the only one that finds the man really scary. His facial expressions and everything God help us”
novothewxveboy wrote: “This is how they deserve to be treated. If the one who wants to be president doesn’t have the decency to come out to talk to Nigerians anything his “representatives” see they should take it abi is it representative that wants to rule the country ?”
bbn_highlight wrote: “It is not fair! They didn’t have to treat him the way they did”
everything_major_thrift wrote: “His face just dey like,” we go deal with all of you,just watch”
meeldread wrote: “This man scared me make dem no near asp rock cos e go be shege pro max. Make God just help us wey never japa”
ms_bake_shop wrote: “Close the gate on adults na by force”
gineertasty wrote: “Nigeria, imagine watching a man that was complicit in bombing your family member come out to run for presidency. And u r supposed to sit and listen to him talk? The trauma alone. This man no suppose show face for anywhere in the world, even in a birthday gathering let alone a TV”
sandy_couture1 wrote: “I pray they doesn’t win because they go show Naija shege with all this”
lulu_skyyy wrote: “wtf! Do they think they’re talking to? ‘Shouting sit down ‘ like they’re talking to little kids… Tinubu should just give the ticket to shettima at this point… nonsense”

I laughed when Hope Uzodinma bragged that igbos will vote APC. We are republican in nature. One man cannot sit and decide who anyone votes. This walk out in imo state will increase Shettima's hate for the igbos but do we care ? 😹😹😹pic.twitter.com/KUB0ySDgIP