The Emotional Moment Mercy Aigbe Reunited With Her Daughter (Video)


On sighting her mother, Michelle became an emotional wreck as she burst into uncontrollable tears. 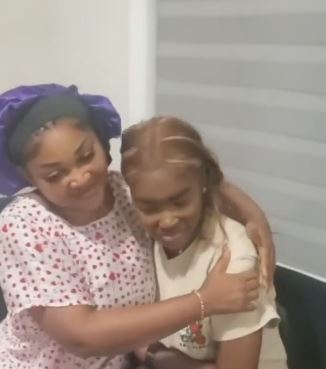 A video has captured the emotional moment Nollywood actress, Mercy Aigbe and her daughter, Michelle broke down in tears as they reunited.

Mercy Aigbe’s daughter, Michelle has been away for a while, schooling in Canada. The actress on the other hand has been on vacation in Canada as well, with her husband, Kazeem Adeoti.

She decided to visit Michelle, who had no idea that she was coming over. On sighting her mother, Michelle became an emotional wreck as she burst into uncontrollable tears.

The tear-jerking moment has sprung reactions on social media, as netizens could not help but adore the duo.

Iyabo Ojo Credits Daughter For Use Of Tiktok
Recent Stories